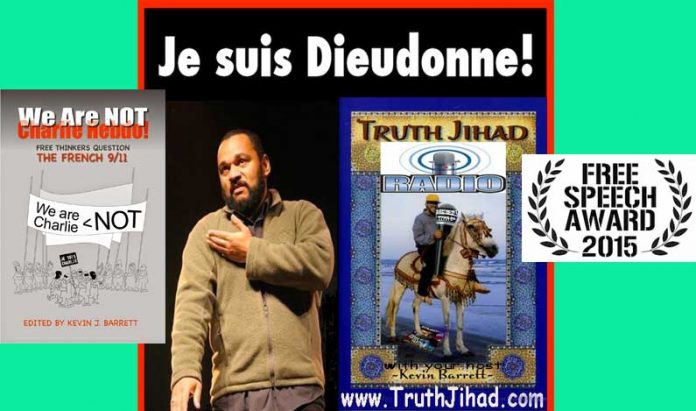 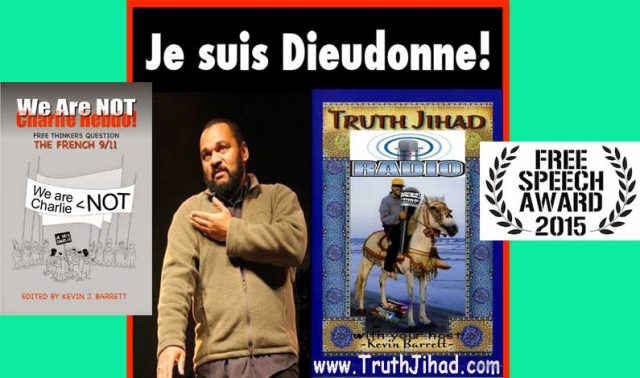 First 40 minutes: Paul Larudee of Stylo France, which just awarded its 2015 Free Speech prize to French comedian Dieudonné, who was arrested for tweeting a joke in the wake of the Charlie Hebdo false flag.

STYLO France, an International literary and human rights group announced today that it will award its 2015 Free Speech prize to controversial French comedian Dieudonné M’bala M’bala in recognition of his exercise of free speech in defiance of repressive laws forbidding it.

“Dieudonné lives in a society where almost unlimited offensive language and artistic expression may be used against some religious and ethnic groups but not others,” said STYLO France spokesperson Paul Larudee at the group’s headquarters in Berkeley, California. “In spite of the consequences, Dieudonné has criticized and ridiculed persons and subjects that are protected from free speech rights under French law. And he has paid dearly for his defiance of these prohibitions.”

Dieudonné has been arrested eight times for anti-Semitism – a criminal offense in France – and has been fined a total of €39,500 ($44,240). His crimes have included comparison of Israeli and Nazi military practices, criticism of the Zionist and Jewish lobbies in France, and inviting convicted “holocaust deniers” on his shows. (It is a crime in France to question or produce evidence contrary to the historical accuracy of standard holocaust accounts.)

Asked whether the STYLO France award is a reaction to the 5 May, 2015 PEN America award to the French satirical publication Charlie Hebdo, Mr. Larudee responded, “Most definitely. Charlie Hebdo never risked breaking French law for the sake of free speech, which is why they avoided criticism of protected groups in France. They paid a high price for insulting Islam but it was totally unexpected, since this is tolerated by the government, so it is hard to say that they showed courage in the face of repression. We think that the STYLO France award to Dieudonné corrects this omission and and also the omission in France of satirical treatment and criticism of protected subjects and classes of persons.”

“Open Mind Conference Amsterdam turned out to be an even greater success than expected. It had everything to do with the dark agenda trying to prevent this beautiful event from happening in Amsterdam. The opposite was the effect.

Despite the rabbies that took the barricades, local politicians tumbling over each other, mainstream media slandering, blazing Holocaust affirmists and an army of police officers harrassing peaceful humans, OMC just was just a plain and simple success. If anything, this proves that light and love prevail over darkness, fear and hatred. If humans join in love and common intentions, with the goal to thrive and live in peace, nothing or no one can stop them.

The whole crew spent a fantastic few days together and we could not wish for a more beautiful seal on this whole experience. Instead of chaos, misery, stress and anger it all turned into a clear, bright and transparent truthers event full of passion and love.  Thank you darkness for giving us the opportunity to show the world you stand no chance when it comes to the truth, unity and love.

Thank you Ole Dammegard, Kenneth O’Keefe, Ian Crane, Frank Rasmussen, Christopher Bollyn and last but not least our host Willem Felderhof to have made this possible.

Want to be part of this experience in the future? Come to Copenhagen in September for a new edition of OpenMind Conference.  With love, Alexandra Niburu.co”