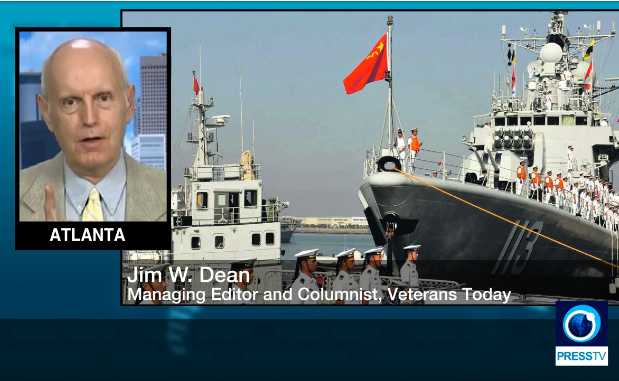 [ Editor’s Note:  This might go down as the week the Pentagon press people went crazy. You can see Gordon’s trifecta of weird stories on them in his War Zone postings this week with total fabrications, starting with his Kosher Klowns burn down the Pentagon. It’s been an entertaining week to say the least.

I can’t believe they could be so stupid as to be sandbagged multiple times in a row, so that leaves only that they were doing it on orders as a diversion. The Russians moving a large fighting force into Syria was off the scale ludicrous. We even had Putin step in to back us up on that one. We thank the big bear for that hug.

Then, we see the third big chemical explosion in China in two weeks get almost no world press, after we had published that our nuclear experts had confirmed the first as a mini-nuke from all the destruction evidence. Those who have been on past investigations have been trained in what forensics to look for.

So when Press TV called me to do this interview, on the phone I could not really understand what the story was because there did not seem to be one, so I asked that it be sent so I could review. They did, and I was right.

It was a non-story, so that left me with commenting on why the Pentagon would hoax both of us by even putting this out. So a handful of Chinese ships are training in international waters. Who cares? The US has been doing it for decades, but who else has fired in anger besides us?

In this interview I had missed the Chinese 70th anniversary this week of the end of WWII. The Western leaders had shamed themselves by stiffing the Chinese through their non-attendance of the event for cheap political motives.

Our Chinese ally, Chiang Kai-shek, spent most of our WWII money buying GM stock and arming up to fight the Communists when they were done beating the Japanese.

So what I finally figured out is that this stupid Bering Sea Chinese flotilla “harem scarem” story was just more cheap political manipulation to wee wee on China’s big event with this silly “Chinese making aggressive naval maneuvers” story.

So I did get the diversion part right; I just did not tie it in with the 70th… Jim W. Dean ]

The US exaggerates China’s military threat in a bid to make Beijing look frightening in the eyes of the American public, says a political commentator and journalist in Atlanta, Georgia.

Jim W. Dean, a managing editor at Veterans Today, made the remarks when asked about the US military sightings of a fleet of Chinese warships near the US coasts of Alaska.

“This is a very strange story; it is a classic case of the US and the Pentagon sometimes wanting to get something into the news to plant some seed of fear about China over nothing,” Dean told Press TV on Thursday.

“It is being puffed up,” it is part of a military confrontation with China that the US Navy exaggerates, he added.

The Pentagon officials said on Wednesday that they have been tracking the movements of the Chinese fleet seeing them move toward the Aleutian Islands.

“This would be a first in the vicinity of the Aleutian Islands,” one official noted about the warships, which have been operating in international waters. “I don’t think we’d characterize anything they’re doing as threatening.”

Dean, however, said that the story is nothing but “propaganda” and part of a “hype” that the US military has designed to avert the public attention from more important matters.

He noted that Washington is trying to “manipulate the public opinion” and introduce China as a “military threat.”

Beijing and Washington have been inching towards a military confrontation during the past few months.

China accuses the United States of meddling with regional issues and purposely playing up existing tensions in the South China Sea, over half of which Beijing claims sovereignty.