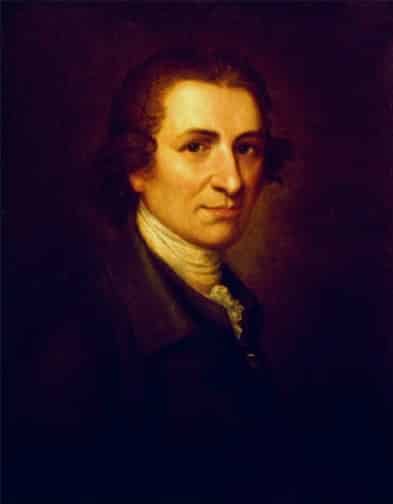 The American founder and Deist Thomas Paine did a great service for us in his investigation and writings on the hateful anti-Gentile teachings of Judaism. His important work should be common knowledge throughout the world.

In Paine’s landmark book on God, Deism and religion, The Age of Reason, he wrote:

We know nothing of what the ancient Gentile world (as it is
called) was before the time of the Jews, whose practise has been to
calumniate and blacken the character of all other nations; and it is
from the Jewish accounts that we have learned to call them heathens.
But, as far as we know to the contrary, they were a just and moral
people, and not addicted, like the Jews, to cruelty and revenge, but
of whose profession of faith we are unacquainted. It appears to have
been their custom to personify both virtue and vice by statues and
images, as is done nowadays both by statuary and by painting; but it
does not follow from this that they worshiped them, any more than we
do.

The famous Bible story of Jonah being swallowed by a large fish (it wasn’t a whale as many people believe – Jonah 1:17) is, according to Thomas Paine, “A fit story for ridicule, if it was written to be believed; or of laughter, if it was intended to try what credulity could swallow; for if it could swallow Jonah and the whale, it could swallow anything.”

In the Bible story of Jonah, Paine points out what are positive traits exhibited by non-Jews/Gentiles. Paine observes:

Jonah is represented, first, as a disobedient prophet, running
away from his mission, and taking shelter aboard a vessel of the
Gentiles, bound from Joppa to Tarshish; as if he ignorantly
supposed, by some paltry contrivance, he could hide himself where
God could not find him. The vessel is overtaken by a storm at sea, and
the mariners, all of whom are Gentiles, believing it to be a judgment,
on account of some one on board who had committed a crime, agreed
to cast lots to discover the offender, and the lot fell upon Jonah.
But, before this, they had cast all their wares and merchandise
overboard to lighten the vessel, while Jonah, like a stupid fellow,
was fast asleep in the hold.

After the lot had designated Jonah to be the offender, they
questioned him to know who and what he was? and he told them he
was a Hebrew; and the story implies that he confessed himself to be
guilty. But these Gentiles, instead of sacrificing him at once,
without pity or mercy, as a company of Bible prophets or priests would
have done by a Gentile in the same case, and as it is related Samuel
had done by Agag and Moses by the women and children, they
endeavored to save him, though at the risk of their own lives, for the
account says, “Nevertheless (that is, though Jonah was a Jew and a
foreigner, and the cause of all their misfortunes and the loss of
their cargo,) the men rowed hard to bring it (the boat) to land, but
they could not for the sea wrought and was tempestuous against
them.” Still, they were unwilling to put the fate of the lot into
execution, and they cried (says the account) unto the Lord, saying,
(v. 14,) “We beseech thee, O Lord, we beseech thee, let us not
perish for this man’s life, and lay not upon us innocent blood; for
thou, O Lord, hast done as it pleased thee.” Meaning, thereby, that
they did not presume to judge Jonah guilty, since that he might be
innocent; but that they considered the lot that had fallen to him as a
decree of God, or as it pleased God. The address of this prayer
shows that the Gentiles worshipped one Supreme Being, and that they
were not idolaters, as the Jews represented them to be. But the
storm still continuing and the danger increasing, they put the fate of
the lot into execution, and cast Jonah into the sea, where,
according to the story, a great fish swallowed him up whole and alive.

Turning his attention to the Jews, Paine gives us important information that helps to protect us from false teachings and assumptions regarding Jews and Judaism. For example, many people believe, based largely on the Hebrew Bible/Old Testament, that the Jews have existed since the beginning of life on Earth. Paine points out that this is not true. On page 321 of The Age of Reason, The Complete Edition he writes concerning the Bible’s account of creation in Genesis:

The next question on the case is, how did the Jews come by these notions, and at what time were they written? To answer this question we must first consider what the state of the world was at the time the Jews began to be a people, for the Jews are but a modern race compared with the antiquity of other nations. At the time there were, even by their own account, but thirteen Jews or Israelites in the world, Jacob and his twelve sons, and four of these were bastards, the nations of Egypt, Chaldea, Persia, and India, were great and populous, abounding in learning and science, particularly in the knowledge of astronomy, of which the Jews were always ignorant. The chronological tables mention that eclipses were observed at Babylon above two thousand years before the Christian era, which was before there was a single Jew or Israelite in the world.

Could we permit ourselves to suppose that the Almighty would distinguish any nation of people by the name of His chosen people, we must suppose that people to have been an example to all the rest of the world of the purest piety and humanity, and not such a nation of ruffians and cut-throats as the ancient Jews were; a people who, corrupted by and copying after such monsters and impostors as Moses and Aaron, Joshua, Samuel and David, had distinguished themselves above all others on the face of the known earth for barbarity and wickedness.
If we will no stubbornly shut our eyes and steel our hearts, it is impossible not to see, in spite of all that long-established superstition imposes upon the mind, that the flattering appellation of His chosen people is no other than a lie which the priests and leaders of the Jews had invented to cover the baseness of their own characters, and which Christian priests, sometimes as corrupt and often as cruel, have professed to believe.

The belief in Jewish superiority prevalent in the Hebrew Bible/Old Testament continues into the New Testament. (For a more in-depth look at anti-Gentile Bible teachings read this article.) For example, Luke 7:1-5 tells of a Roman centurion who had a servant who was sick. He wanted Jesus to heal his servant so he asked elders of the Jews to ask Jesus to heal his servant. How did the Jewish elders convince Jesus to heal him? They told Jesus that the Roman centurion loved their nation (which would be Israel) and that he had even built a synagogue for the Jews. This convinced Jesus to heal the Roman’s servant.

Paul, a.k.a. Saul, told the Gentiles in Rome who had bought into Christianity that they owed a debt to the Jews for Christianity. He wrote at Romans 15:25-27:

What a scam! The Gentiles bought into the superstitions of the Jews and are, therefore, indebted to the Jews and need to repay them, not with prayers and mythical things, but with hard cash and carnal things! This Bible teaching is on Zionist Christian John Hagee’s page of why Christians owe support to Jews and the Jewish state of Israel. It’s a powerful and damaging religious scam.

Thankfully there is no need to believe in “holy” books of any type. Thomas Paine made this clear when he wrote in The Age of Reason, The Complete Edition:

Books, whether Bibles or Korans, carry no evidence of being the work of any other power than man. It is only that which man can not do that carries the evidence of being the work of a superior power. Man could not invent and make a uni verse – he could not invent nature, for nature is of divine origin. It is the laws by which the universe is governed.

When, therefore, we look through nature up to nature’s God*, we are in the right road of happiness, but when we trust to books as the Word of God, and confide in them as revealed religion, we are afloat on the ocean of uncertainty, and shatter into contending factions. The term, therefore, natural religion, explains it self to be divine religion, and the term revealed religion involves in it the suspicion of being artificial.

Thomas Paine also explained in The Age of Reason why Deism is not much better known than it is. He wrote:

The only religion that has not been invented, and that has in it
every evidence of divine originality, is pure and simple Deism. It
must have been the first, and will probably be the last, that man
believes. But pure and simple Deism does not answer the purpose of
despotic governments. They cannot lay hold of religion as an engine,
but by mixing it with human inventions, and making their own authority
a part; neither does it answer the avarice of priests, but by
incorporating themselves and their functions with it, and becoming,
like the government, a party in the system.

*“Nature’s God” is one of the Deistic ways God is mentioned in the Declaration of Independence.