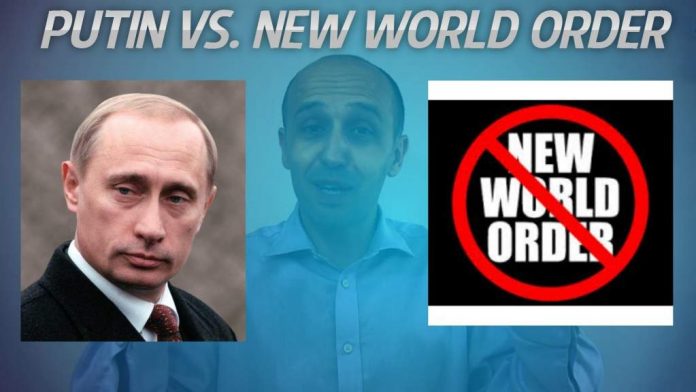 Putin continues to drop political explosives in the New World Order by saying that its agents are liars, and NWO agents continue to be stunned largely because Putin has rendered them virtually powerless, helpless, and hopeless.

The political tectonic shift is already in place. Just pick up some recent newspapers, most specifically the New York Times, and you will read things like this:

“THE Russian president, Vladimir V. Putin, continues to surprise. Russia’s military intervention in Syria, followed by a face-to-face meeting in Moscow this week with that country’s president, Bashar al-Assad, has startled the world.”[1]

It got even more interesting. Back in 2014, the Washington Post came out with an article by Jewish professor Daniel W. Drezner entitled, “Why Vladimir Putin’s strategic genius scares the heck out of me.”[3] In that article, Drezner seemed to resemble Gollum, the ambivalent creature from J. R.R. Tolkien’s The Lord of the Rings.

We expect that kind of reasoning from Drezner because he is living in an irrational system, which at its core is diabolical. He placed a cartoon in the article which displays Putin pouring blood all over the floor, which obviously represents Crimea. But the simple fact is that Drezner cannot seriously look at himself in the mirror and see blood all over his hands and face. The cartoon should actually represent what Drezner’s brethren have done all over the Middle East.

It was Drezner’s brethren, Jewish intellectuals and Neo-Bolsheviks, who ended up pursuing the war in Iraq. Granted, Drezner has criticized the war, but he could never name the real culprits who actually sent the six-trillion dollar bill to the American people. In his 2007 article entitled “The New World Order,” Drezner wrote:

“More ambitiously, the Bush administration has tried to reshape international organizations to make them more accommodating to rising powers. In some instances, the changes have occurred almost as a matter of course.”[4]

But who was pushing Bush, Drezner? Why couldn’t you just point your readers to simple sources like the Jewish Virtual Library, which has a list of those who were behind the Bush administration? Why couldn’t you talk about people like Ben Bernanke and Larry Summers, two of the most corrupt individuals who are largely responsible for the economic chaos in the United States?

“’Helicopter Ben’ Bernanke has printed a couple of trillion dollars, just waved a wand and invented them, then used those funds to buy things like mortgages and t-bills.”[5]

Now, suppose you bought a car and after a few days you realized that the car dealer actually deceived you. You found out that the car needs to be placed in junkyard because it is useless. Wouldn’t you demand an explanation? Wouldn’t you be angry? And would you ever go back to that dealer and ask for help on how to buy another car? Wouldn’t that be really stupid?

Get this: Ben Bernanke was just on the news about two days ago and he was being asked about the economy! He said,

“The domestic economy at least is pushing forward…and we have a very low inflation rate, [which is] below the Fed’s two percent target. So, that would be the argument for going ahead and getting ahead of the curve.”

People like Drezner missed the fact that Putin has warned NWO agents over and over that he would strip them from their decadent nests. Putin invited NWO agents to discuss some of those issues on a purely moral and intellectual level, but they refused.

Putin had no other choice but to put the issues to Russian intellectuals and thinkers, people who obviously understand what he is trying to say. “We have an open discussion here,” Putin said in his recent address, and “this is an open intellectual platform for an exchange of views, assessments and forecasts that are very important for us here in Russia.”

The fact that Putin summoned Leo Tolstoy’s War and Peace during his speech once again suggests that he is right in line with the Western intellectual tradition, which was largely based on reason and ultimate Logos. Putin argued that peace cannot be achieved without appealing to moral rules and principles:

“The main thing is to ensure that this competition develops within the framework of fixed political, legal and moral norms and rules. Otherwise, competition and conflicts of interest may lead to acute crises and dramatic outbursts.

“We have seen this happen many times in the past. Today, unfortunately, we have again come across similar situations. Attempts to promote a model of unilateral domination, as I have said on numerous occasions, have led to an imbalance in the system of international law and global regulation, which means there is a threat, and political, economic or military competition may get out of control.”

If an agent seeks to violate the moral law and political order, argued Putin, then that agent must face the consequences of his actions—in the same way that a genuine police officer is punishing a law breaker or gangster or thug. NWO agents in the United States and Israel have violated the moral and political order, and this is one reason why Putin confronted that issue indirectly:

“The use of the threat of a nuclear missile attack from Iran as an excuse, as we know, has destroyed the fundamental basis of modern international security – the Anti-Ballistic Missile Treaty. The United States has unilaterally seceded from the treaty. Incidentally, today we have resolved the Iranian issue and there is no threat from Iran and never has been, just as we said.

“Recently the United States conducted the first test of the anti-missile defence system in Europe. What does this mean? It means we were right when we argued with our American partners. They were simply trying yet again to mislead us and the whole world. To put it plainly, they were lying. It was not about the hypothetical Iranian threat, which never existed.

“It was about an attempt to destroy the strategic balance, to change the balance of forces in their favour not only to dominate, but to have the opportunity to dictate their will to all: to their geopolitical competition and, I believe, to their allies as well. This is a very dangerous scenario, harmful to all, including, in my opinion, to the United States.”

Putin is again showing the entire world that NWO agents have no clothes, and they are now paying close attention to what he is saying. They are now listening to every single word he has uttered. They are examining his speech and comments with a political microscope and then responding in hundreds of articles, many of which are pure mumbo jumbo.[6] Jim W. Dean has recently said that

“Putin continues to slay Western propaganda and leadership reputations almost every time he gives a talk.”

True. He continues to slay them not with rhetoric, but with what Emmanuel Kant would have called practical reason. And the New York Times proves this point when they say that Putin is “doubling down on bad decisions guided by an outdated theory of international politics.”[7]

Outdated theory? Fighting ISIS in Syria is outdated? Telling NWO agents that they worship Satan is outdated? You see, Putin has every reason to say that the New World Order is on the borderline of conspiracy:

“We also see the development of the process to create non-transparent economic blocs, which is done following practically all the rules of conspiracy. The goal is obvious – to reformat the world economy in a way that would make it possible to extract a greater profit from domination and the spread of economic, trade and technological regulation standards.”

Speaking to NWO agents in the United States on how they are largely responsible for the Syrian refugee crisis, Putin unapologetically said:

“The authorities in countries that seemed to have always appealed to such values as freedom of speech and the free dissemination of information – something we have heard about so often in the past – are now trying to prevent the spreading of objective information and any opinion that differs from their own; they declare it hostile propaganda that needs to be combatted, clearly using undemocratic means.

“Unfortunately, we hear the words war and conflict ever more frequently when talking about relations between people of different cultures, religions and ethnicity.

“Today hundreds of thousands of migrants are trying to integrate into a different society without a profession and without any knowledge of the language, traditions and culture of the countries they are moving to.

“Meanwhile, the residents of those countries – and we should openly speak about this, without trying to polish things up – the residents are irritated by the dominance of strangers, rising crime rate, money spent on refugees from the budgets of their countries.

“Many people sympathise with the refugees, of course, and would like to help them. The question is how to do it without infringing on the interests of the residents of the countries where the refugees are moving.

“Meanwhile, a massive uncontrolled shocking clash of different lifestyles can lead, and already is leading to growing nationalism and intolerance, to the emergence of a permanent conflict in society.”

The New World Order has created ISIS. ISIS, as Putin put it, “is an enemy of civilization” and is “trampling upon morals and world religious values, including those of Islam, thereby compromising it.” Finally, Putin wounded NWO agents when he asserted:

“It is impossible to combat terrorism in general if some terrorists are used as a battering ram to overthrow the regimes that are not to one’s liking. You cannot get rid of those terrorists, it is only an illusion to think you can get rid of them later, take power away from them or reach some agreement with them. The situation in Libya is the best example here.”

So, Putin does not just posit an assertion and leaves the political scene without evidence. He suggests that a case study is simply Libya. What happened when NWO agents killed Gaddafi in cold blood?

Chaos, destruction, and suffering on a massive scale. Why? Well, NWO agents have abandoned the light of reason and have embraced complete madness. E. Michael Jones has recently argued that people like Michel Foucault have used madness to promote their own revolutionary (and obviously Satanic) ideology.[8] NWO agents are doing the same thing in Syria. Putin is saying that people of reason cannot tolerate that kind of behavior any longer.

If Edmund Burke is right in saying that “It is ordained in the eternal constitution of things, that men of intemperate minds cannot be free” and that “Their passions forge their fetters,”[9] then Putin is doing a great job by introducing morality and practical reason to the political world. It also means that NWO agents who are slaughtering Palestinian civilians in Israel must be removed from their decadent nests as well.