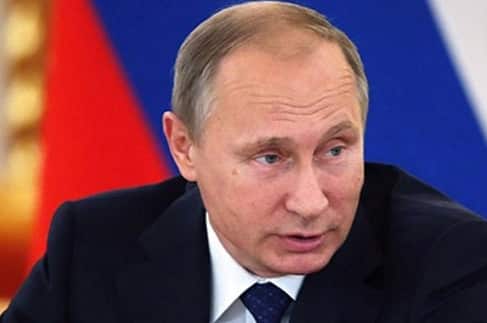 Vladimir Putin has issued his strongest warning yet of fresh military interventions in the Middle East, with lawless Libya and war-torn Yemen in the Kremlin’s crosshairs.

The Russian president said his priority was to protect citizens living abroad, regardless of where they were.

That could include action to safeguard Russians living in the North African state of Libya, which has been ravaged by violent ISIS terrorists since the fall of dictator Colonel Gaddafi.

Speaking at the fifth World Congress of Compatriots in Moscow, Mr Putin said: “People who are not in Russia due to various reasons should be firmly sure: we will always protect your interests.”

“Moreover, in difficult and crisis situations, such as in Libya, Syria or Yemen.”

Russia has been providing humanitarian aid to Yemen since the outbreak of the civil war in March.

The United Nations (UN) estimates around 5,000 people have been killed in the Syria conflict since March, more than half of them civilians.

It comes as Russia revealed it has pounded a staggering 263 ISIS targets in Syria over the last two days as Putin steps up his bid to wipe out the terror group.

Moscow’s jets carried out 81 strikes on targets belonging to ISIS and other militants across Syria, according to the Russian defense ministry.

Russian bombers “destroyed a large fortified location of ISIS militants,” including an air-defence gun and a tank, a defense spokesman said.

A spokesman said the bombers “destroyed a large fortified location” of sick fanatics including an air-defense gun and a tank.