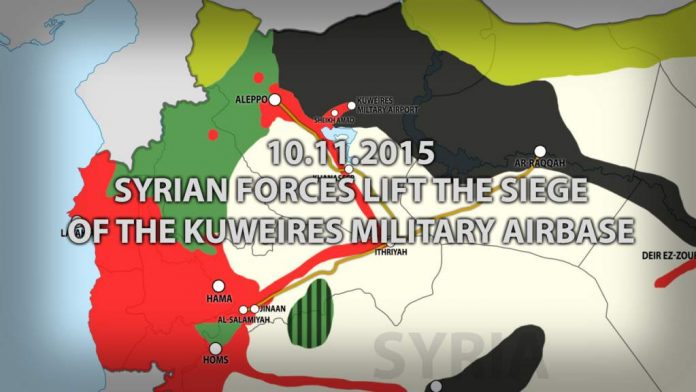 The SAA in coordination with the National Defense Forces (NDF) captured the village of Jinaan in southeast Hama after a series of intense firefights against the ISIS militants groups along the Salamiyah-Raqqa Highway.

According to the field reports, the Syrian forces destroyed ISIS defenses at Jinaan after killing several ISIS militants and destroying their headquarters inside the village.

Then, the SAA and the NDF reportedly captured 6km of terrain along the Salamiyah-Raqqa highway. If it’s true, it’s their largest gains on this front in over eight months. The Salamiyah-Raqqa highway is used by ISIS to launch attacks on the SAA positions in the southeastern Hama. The SAA have been carrying out operations to clear the area of the Khanasser-Ithriya highway from the ISIS presence. This latest attack was part of the SAA eforts at this front.

The Russian Air Force has recently intensified their airstrikes in the eastern Hama in to protect the Syrian forces’ main supply route to the Aleppo province. Another goal of these air raids is to deter the terrorist group from pushing west towards the city of Al-Salamiyah.

On Monday, the Syrian forces broke the ISIS frontline defenses at the town of Sheikh Ahmad in the Deir Hafer Plains and imposed full control over this area after a series of intense firefights. On Tuesday, the SAA broke-through ISIS’ final line of defense at the east Kuweires village and military housing and liberate the remaining area lifting the three year long siege.

The recent developments are showing that, despite the counter-attacks and even tactical success at a number at fronts, the terrorists have lost a strategic initiative in Syria and passed to defensive actions. Due to the start of the Russian military operations, the pro-government forces have gained a substantial advantage in the intelligence, coordination and fire power. Russian warplanes play a crucial role for successful offensive actions at the battlespace.

Iraqi security forces liberated the western part of the city of Ramadi from the ISIS control. Col. Walid al-Dulaimi said that security forces had full control over western Ramadi and were waiting on reinforcements to advance toward the city center. The Iraqi security forces’ operations aimed to liberate the city from ISIS have been continuing since July. In the coming weeks, the U.S.-led coalition plans to increase airstrikes in Iraq and Syria against ISIS. Nonetheless, it’s hard to forecast a real result of these operations because the previous US efforts against ISIS de-facto failed among other things because of a weak coordination between the US Air Force and the local ground forces.