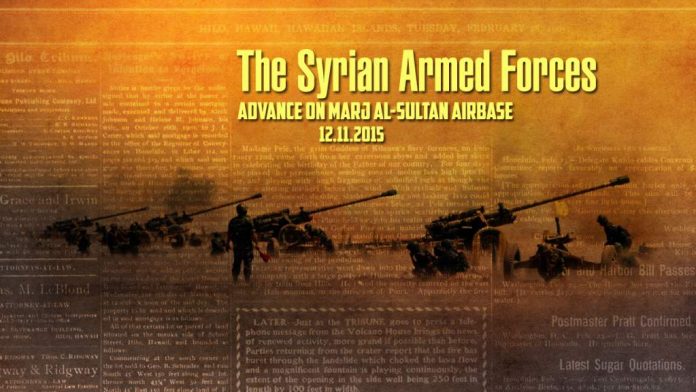 The Russian Air Force carried out 85 sorties and targeted 277 terrorist targets in the provinces of Aleppo, Damascus, Lattakia, Hama, Homs and Idleb within the past 48 hours. According to reports, the Russian warplanes destroyed 23 command centers, 17 munitions and weapons depots, 90 fortified sites equipped with firepower and technical equipment, and 147 reinforcement and supply areas of terrorist organizations.

The Syrian Arab Army (SAA) and the National Defense Forces (NDF) are conducting operations to win back control over the Marj al-Sultan Airbase in Damascus. Pro-Syrian sources report the pro-government forces have already taken control of the village of Nawleh near the airbase. A united force of the Jeish al-Islam and al-Nusra terrorist groups opposes them in the sector. The terrorists control about 20% of the airbase territory.

69 militants turned themselves in to the Syrian authorities in the Aleppo province on Wednesday as the SAA defeated the ISIS terrorists who had laid siege on the Kuweires Airbase. The SAA is continuing advance in the sector. As SouthFront: Analysis & Intelligence forecasted, the Syrian forces cut off the ISIS supply route that stretched from Aleppo to Raqqa.

Considering the Kuweries Military Airport is located 8 km west of the ISIS’ stronghold at Deir Hafer and 17km south of the city of Al-Bab the terrorist there will have to rely on the supply roads that are within range of the SAA’s attacks and shellings.

Another feature is the Syrian forces presence at the southern countryside of the Al-Bab Plains. From this foothold, the SAA and its allies will able to cross the Aleppo-Raqqa highway to harass ISIS’ positions in the Al-Bab Plains.

The Iraqi forces gained control of al-Zawiye village, Northeast of Makhoul Mountains, in Salahuddin province after tough clashes with ISIS militants on Wednesday. The field reports say the artillery units targeted a car bomb factory in al-Salman village and destroyed it.

Meanwhile, al-Hashd al-Shaabi forces thwarted two ISIS attacks in al-Fatha area, North of Tikrit, and the area of al-Sad, West of Tikrit, the capital of Salahuddin province. The both sides report heavy clashes.

The battle of Ramadi is continuing without any crucial developments for the both Iraqi forces and ISIS militants.