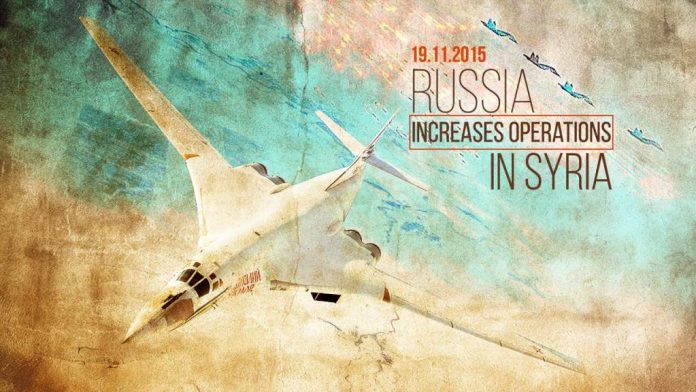 This week, Russia has dramatically increased its military operations in Syria. Russia is using long-range aviation bombers – Tu-22M3, Tu-95MC and Tu-160 – to target terrorist positions. Also, on Tuesday, the Russian cruiser Moskva fired a number of cruise missiles from the Mediterranean Sea and the militants’ positions at the ISIS Syrian capital, Raqqa. This was just the start. Russian army Gen. Valery Gerasimov has announced that Russia is allocating 25 strategic bombers for the Syrian mission. Separately, Russian Air Forces will be strengthened with advanced 37 aircraft, including eight Su-34 bomber jets and four Su-27 fighter jets. Thus, Moscow is more than doubling the strike potential of the Russian Air Force in the region.

Moreover, the Russian Armed Forces will organize joint military operations with the French Navy to combat terrorists in Syria. According to chief of the main operations directorate of Russian army’s General Staff Andrey Kartapolov, it becomes possible with the arrival of the Charles de Gaulle warship to the Syrian shore. The sides are working on a draft plan for joint action on the sea and in the air.

France has also ramped up their air campaign against ISIS over the past days. Francois Hollande will meet Putin in Moscow on Nov. 26. A public idea of the event is to discuss how the countries’ militaries might work together.

The joint fight against ISIS may cause Russia and the West, as a first step France, to collaborate more closely in Syria. There are still limits to that cooperation because too many sides have different interests in the region. But it will become a step on the way to find a diplomatic solution of the crisis.