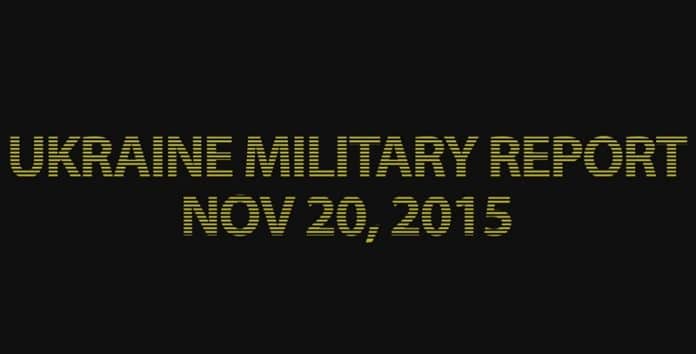 After several weeks of apparent troop withdrawals and drawdowns, there are once again ominous military developments in Ukraine which might herald either preparations for a renewed saber-rattling to draw attention back to Ukraine following the Paris terror attacks which have led to the intensification of the Russian air campaign against ISIS and prompted the French president Hollande to seek to improve his country’s relations with Russia. This situation gives Poroshenko a considerable incentive to attempt to escalate the conflict in order to prevent a Franco-Russian improvement in relations.

There are reports that Ukraine will ban males 45 years old and younger from leaving Ukraine starting in January 1, 2016 in preparation for the 7th wave of mobilization. There are also reports that Ukraine is no longer releasing individuals mobilized under previous waves of mobilization whose term of service has expired. Likewise contract soldiers who have been signed up for 6-month terms of service are not being released from service. The atmosphere of war hysteria is being kept up by Ukrainian officials with Aleksandr Turchinov in the lead are claiming that Ukraine’s top 2016 priority will be its air defenses, due to the demonstrated Russian air capabilities over Syria.

The UAF has stepped up demonstrative operations near the border with Russia in the Crimea, ostensibly to “rehearse defending the border against Russian invasion”.

There are also reports of sizable Ukrainian troop movements near the border with Novorossia, which raises the possibility the earlier troop withdrawals were simply part of a major regrouping of UAF forces, possibly in preparation for a renewed offensive. Ukraine has also taken receipt of two US Firefinder counter-battery radars, which were delivered to Lvov. US instructors have begun training Ukrainian soldiers in their operation.

Still, would the junta really want to risk an escalation under these conditions? UAF units’ morale remains at rock bottom, with most of their casualties coming from “non-combat” incidents which are usually alcohol and even drug-related, like the recent deaths of four mechanized brigade soldiers who have just returned from a training exercise and were killed in a drunken shoot-out.

Ukraine’s defense industry is continuing its downward spiral, with the Motor Sich, a key engine manufacturer, being reduced to making…meatgrinders. Which is a curious metaphor for the current state of Ukraine…

However, whether or not Ukraine decides to start another round of fighting, one thing is certain: Russia Is Watching.