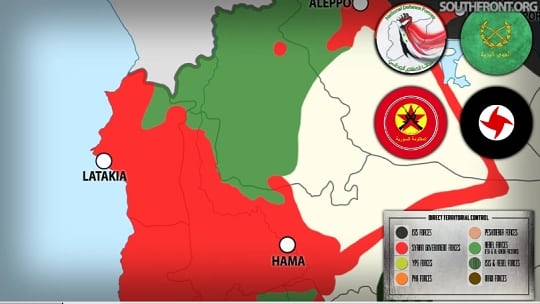 On Saturday the Syrian Arab Army (SAA) in coordination with the National Defense Forces (NDF), the Syrian Social Nationalist Party (SSNP), and Muqawama Souri (Syrian Resistance) captured the Al-Ziwayqat Mountains after an intense series of firefights with Al-Nusra militants supported by the Free Syrian Army’s “Liwaa Suqour Al-Ghab”. Now, the SAA is advancing inside the town of Al-Ziwayk.

The Syrian forces supported by Russian warplanes launched a surprise offensive in Jabal Al-Turkmen this week, capturing the villages of Deir Hanna and Al-Daghmashaliyah before advancing north towards the Turkish border with the Latakia province.

In the southern part of the Aleppo Province, the Harakat Ahrar Al-Sham militants supported by the Harakat Nouriddeen Al-Zinki and Al-Nusra groups launched a counter-offensive at the strategic town of Tal Al-‘Eiss to reverse the gains made by the SAA and Hezbollah last week. The terrorist groups launched the counter-offensive after they got reinforcements from the Idlib Governorate. According to the local sources, several hundred fighters arrived to support the terrorists’ operation.

The goal for this counter-offensive is to recapture Tal Al-‘Eiss and preparations for a counter-assault at the city of Al-Hadher, which was seized by the SAA and Hezbollah two weeks ago. This won’t be an easy task for the terrorists because the Syrian forces have heavily entrenched inside these towns. The clashes are continuing.

A recently released video shows an Al-Nusra field commander thanking the so-called moderate terrorist from the Free Syrian Army for giving his forces US-made anti-tank TOW missiles. According to the reports, Saudi Arabia sent 500 TOW missiles to Al-Nusra directly last month, but the US claims that it is just supplying aid and weapons to the FSA or the so-called moderate terrorists in Syria.