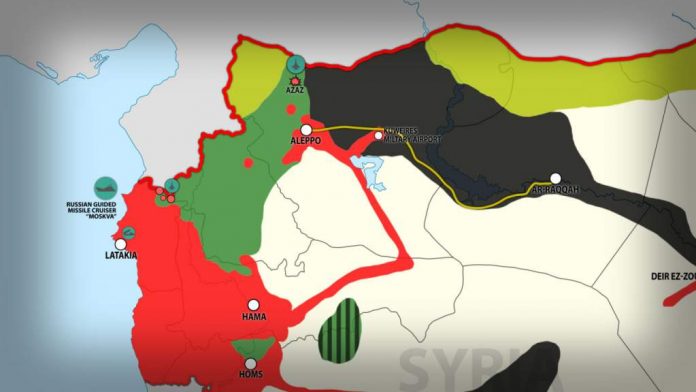 The Russian Air Force increased number of airstrikes over the Turkmen Mountains, Kurdish Mountains, and the Prophet Jonah Mountains of northern Latakia. According to the field reports, the Russian warplanes and their helicopter gunships have already conducted three dozen airstrikes in this area.

Meanwhile, Moscow is ready to defend its military grouping in Siria. Russian guided missile cruiser «Moskva» joint with escort ships arrived at the shore zone of Northern Latakia near Turkish border to defend Russian Air Forces from any threats. S-400 Triumf anti-aircraft weapon systems are deploying at the Russian Air Force base in Latakia.

In turn, Turkey started a military build up at the Syrian border. According to the media report, Anakra moved at least 20 additional battle tanks from the western provinces to the border with Syria.

The Syrian Arab Army (SAA) in coordination with the National Defense Forces (NDF) and the Palestine Liberation Army (PLA) seized the strategic Marj Al-Sultan-Hawash Al-Nawlah road that leads to the village of Marj Al-Sultan.

The pro-government forces’ mop-up operations inthe Eastern countryside of Aleppo have successfully ended in the liberation ofall the villages and farms and in the recapturing of the Aleppo-Raqqa highwaynear the Kuweires airbase. The Syria forces completely cut off the ISIS supplyroute from Raqqa.