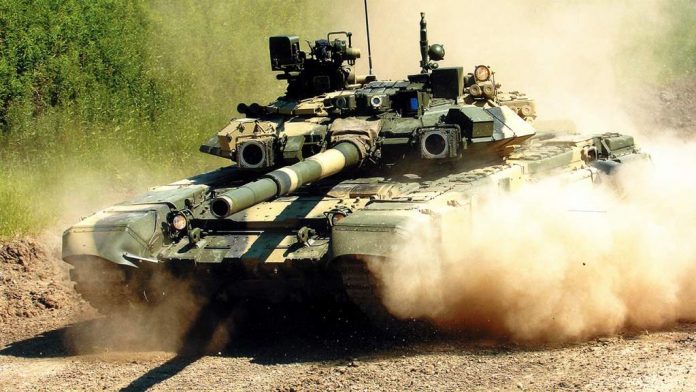 The Syrian Arab Army (SAA) has deployed newly-arrived Russian T-90 advanced battle tanks to the Southern Aleppo front for the first time. The Russian battle tanks will help to continue the SAA advance on the towns of Kafraya and Al-Fou’aa.

T-90 offers the Syrian army several new features to fight ISIS including a 2A46M 125 smoothbore tank gun; a four-stroke V-12 piston engine; and most importantly, the Kontakt-5 explosive reactive armor. Much of the ISIS’ successes in Northern Syria has come from their US manufactured anti-tank TOW missiles. The T-90 Tanks’ armor should be strong enough to endure the impact from the TOW missile.

Meanwhile, the SAA, the National Defense Forces (NDF) and Hezbollah are continuing operations against ISIS in other parts of the Aleppo province. They restored full security to Aqulah village and its surroundings on Sunday.

On Monday, the SAA repelled the militant groups’ offensive on their military checkpoint near al-Aziziyah and killed or wounded at least 50 of them in the counter-assault on Monday. The pro-government forces are advancing near Deir Hafer region.

According to the Syrian sources, the leader of Ahrar al-Jabal al-Wastani Brigade, part of the 101st Division of the US-supported Free Syrian Army, Colonel Ahmad al-Ali Abu-Ayham, was killed in the fighting on Jabal al-Akrad, northeastern Latakia Governorate on Saturday.

The Turkish Radar Electronic Attack System KORAL is reportedly being sent to the border with Syria to counter the Russian S-400 systems located on the Hmeymim air base. The decision to transfer the S-400 systems to the Russian air base and was made after the Turkish Air Force had brought down the Russian Su-24 bomber in the skies of Syria.