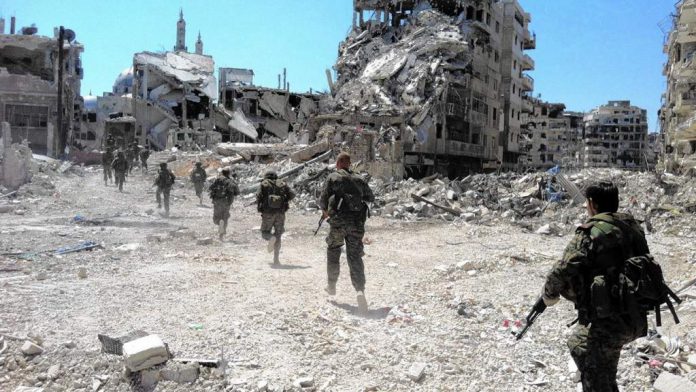 The Syrian Army and the National Defense Forces, supported by Russian air strikes, managed to drive ISIS out of a long section of the strategic Aleppo-Raqqa highway in the northern part of Syria. According to the field reports, the Syrian troops’ offensive forced the terrorists to retreat and suffer large casualties in the fighting. The clashes followed the Syrian Arab Army’s last week assault on the ISIS positions at the Siyasko Chemical Factory’s western and eastern perimeters.

The Syrian Arab Army(SAA) is continuing to advance towards the Turkish border in northern Latakia. The pro-government forces capitalized the Russian air support freeing the villages of ‘Arafat, Rwaysat Al-Sheikhou and Katf Al-Salat captured by Al-Nusra militants three months ago. The goal of the military operation is to take control of the border with Turkey and to secure the Latakia-Idlib axis.

The SAA, Hezbollah and the National Defense Forces (NDF) are advancing in the Aleppo province after capturing the village of ‘Aqulah over the weekend. The Syrian forces launched an assault on the ISIS positions at the Rasm Al-‘Abid Grain Silos and reportedly killed about 15 militants and destroyed 3 armored vehicles. Following the clashes with ISIS, the SAA and its allies imposed full control over the Rasm Al-‘Abid Grain Silos expanding a buffer zone at the southern perimeter of the Kuweires Military Airport and the Aleppo-Raqqa Highway.

Russia is also reportedly preparing to deploy fixed-wing aircraft and about 1,000 troops to the government-controlled Shayrat Airbase in Homs Province. According to some reports, the force of guards and military engineers has already been deployed there. If it’s true, this step will significantly help to the Syrian forces’ ongoing offensive to recapture the ISIS-controlled city of Palmyra.

SouthFront: Analysis & Intelligence remembers France agreed to coordinate airstrikes with Russia against ISIS and share information on the disposition of armed groups in Syria. On December 1, the German cabinet backed plans for military support in the fight against ISIS militants in Syria. Tornado reconnaissance aircraft, a naval frigate and a 1,200-strong force will be sent to the region under the proposals.

Germany has an agreement with France to share information on the disposition of armed groups in Syria. Thus, Russia-France-Germany trilateral cooperation in the intelligence sharing on the Syrian crisis could be described as existent.