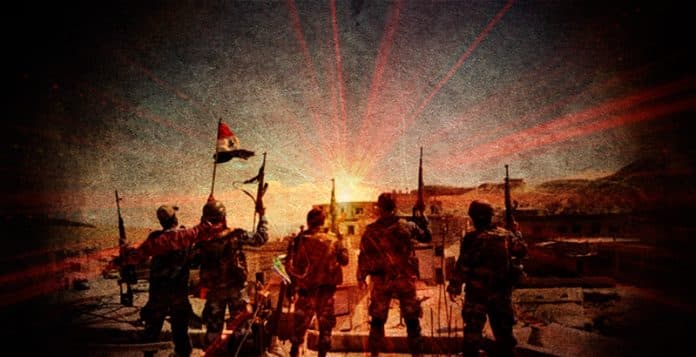 On December 1, the Free Syrian Army’s central command agree to a permanent ceasefire and evacuation for the remaining rebels inside of Al-Wa’er with the Governor of Homs – Talal Al-Barazi. The evacuation includes two phases:
•    First is to allow humanitarian aid to any remaining civilians living inside the district
•    Second is the transportation of the 600 rebel fighters from Al-Wa’er to the Idlib Governorate. The plan is supposed to take about two months. After this, the Syrian Government will be in full control of the city of Homs. The agreement has become possible due to a strategic initiative taken by the pro-government forces after the start of the Russian military operations in Syria.

Earlier, SouthFront: Analysis & Intelligence has noted that despite the terrorists’ counter-attacks, the Syrian Arab Army and its allies supported by the Russian warplanes, intelligence assistance and material support has a significant edge in a fire power and the command.

ISIS claimed control of al-Kafrah in a statement and are moving towards Azaz. If ISIS takes Azaz it will extend the ISIS control of bordering areas which allows greater access to smuggling routes for potential recruits and arms. It will also break the Army of Conquest military operations room, which includes Al Nusra, supply routes to the Aleppo city.

The Russian Ministry of Defense has presented evidence of the Turkish involvement in the ISIS oil business. It includes photos and videos of oil delivery convoys passing the border between Syria and Turkey and information about the routes of oil smuggling from Syria and Iraq to Turkey. There are three main oil routes:
1.The western route leads to the Turkish ports in the Mediterranean
2.The northern — to Patma oil refinery
3.The eastern — to Dzhazri transfer point
The town of Dier ez-Zor is one of the largest centers of oil extraction. The delivery route runs from Eastern Syria to the Batman refinery in Turkey. The size of the illegal oil trade is impressive.