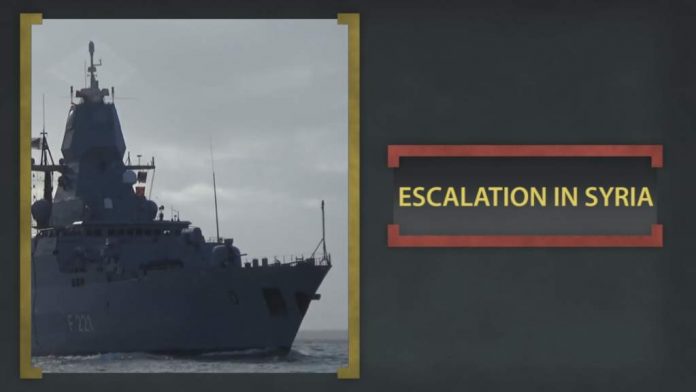 The recent developments show significant changes in the strategy of the Western countries involved in the Syrian conflict.

The US has sent ground forces, including special operations units, into the region. French Air Force has sharply increased the number of sorties, and France’s rapid-reaction troops and naval units are being moved closer to Syria. The United Kingdom has also begun to participate in the US-led anti-ISIS coalition strikes on Syrian soil. Likewise Germany has begun to deploy its aircraft and relocating almost 1200 quick-reaction troops to the Syria-Iraq battlefield. Turkey is deploying a large military attack force, including a number of armored units, at the border with Syria. It seems that NATO powers have realized the strategy aimed at Assad’s ouster by a diverse range of militant groups including ISIS which is backed by Turkey and the US has failed.

According to the initial scenario implemented by the West, ISIS and other militant groups, deceitfully called the moderate opposition, were to carry out a Libya-like scenario in Syria and oust or preferably kill Assad and plunge the whole country into chaos. Then the US-led coalition would start a full-scale military operation to stop the terrorists threatening the “moderate opposition” in Syria, deploy NATO forces on the ground and take control of the crucial oil and logistic infrastructure. Western oil corporations supported by NATO would then restore the state of affairs as it existed more than 40 years ago. Syria would fall victim to total exploitation by overseas powers. The Mediterranean would become Alliance’ internal lake.

Now it’s clear that Syria won’t fall under terrorist group pressure. The Syrian forces backed by Russia and Iran are gaining momentum, recapturing cities and facilities earlier controlled by militants. The NATO allies urgently need a new plan to hold control at least of the northern oil corridor from Iraq and try to take advantage of this opportunity to involve Russia in a long expensive war, in other words, to accomplish that which they failed to do in Ukraine. It means that the NATO contingent must occupy crucial infrastructure including oilfields before the Syrian government forces liberate it. Anti-government, meaning anti-Russian and anti-Iranian, forces would be established in parts of divided Syria. The need for an excuse to implement the changed approach could be the reason why the Nov.13 Paris attack wasn’t prevented by the Western special services.

The implication of the Western plan to divide Syria in a number of vassal entities leads to 3 main scenarios:

1)   Military buildup and escalation in the region could lead to open military conflict between NATO and the alternative anti-ISIS coalition that is led by Russia. This regional conflict could easily lead to a global war. Moreover, Turkey, a NATO member state, has already shown that it’s ready to escalate the situation to defend its illegal oil business linked with ISIS.

2)    If the Syrian Arab Army with support by militia forces, Iran, and Russia isn’t able to show a significant success on the battlefield, Syria could be easily divided by the Western-backed ground forces supported by NATO airpower and intelligence assets. A direct military intervention to take control of the oil structure and crucial logistical points also remains possible. Even if NATO and its regional allies successfully take control of a significant part of the country, this escalation is unlikely to be avoided. The situation will become more acute due to the establishment of an aggressive puppet regime on the Syria’s territory. Considering that the alternative anti-ISIS coalition won’t lay down its arms, an open conflict could be easily provoked by the interested powers.

3)   If the Syrian government forces supported by Russia and Iran take control of the country’s key areas, the US-led coalition will face the fact that Syria is de-facto liberated from terrorist groups. It could prevent a direct military intervention by NATO. In this case, the NATO countries would strengthen their presence in Iraq and use it as a foothold to launch further destructive actions against Syria. However, it’s the safest scenario most likely to avoid a global escalation.