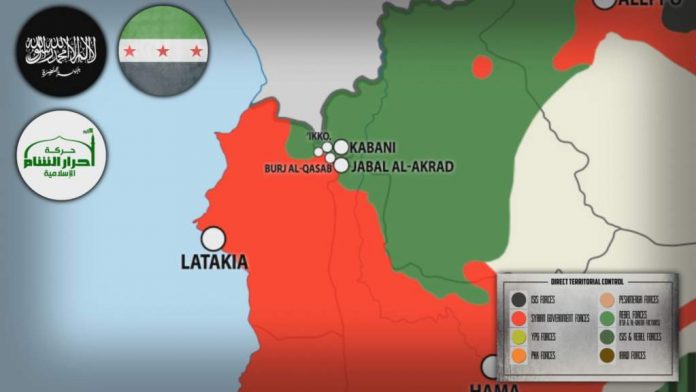 ISIS militants launched a full-scale offensive on the villages of Ayyash and Bgelia after the US-led ‘anti-ISIS’ coalition’s airstrikes against the Syrian Arab Army (SAA) in this area. On Sunday, the US-led ‘anti-ISIS’ coalition poundend the Syrian Arab Army’s positions in the province of Deir Ezzor. 1 soldier was killed and half dozen others were wounded. According to the reports, the military camp belongs to the SAA’s 137th Artillery Brigade in the village of ‘Ayyash was a main target of the US warplanes.

On Monday, the SAA launched an offensive in Jabal Al-Akrad and took control of Burj Al-Qasab. several It allowed the pro-government forces to capture several key locations earlier controlled by Al-Nusra, the Free Syrian Army and Harakat Ahrar Al-Sham in the Latakia province. They are the village of ‘Ikko located near the town of Kabani, and the villages of Bouz Al-Khirbat, Beit Fares, and Al-Mughayriyah. It allows the SAA and its allies to advance on Kabani.

On December 7, Iraqi Prime Minister Haider al-Abadi reiterated the withdrawl of Turkish troops from northern Iraq within 24 hours. Turkey were invited by the Kurdish Regional Government, with no coordination or communication with Baghdad. It has since said it will replace existing troops in Iraq that number a few hundred, with as many as 2000 soldiers. The Iraqi security forces and the Shi’ite militias are overstretched with their fight against ISIS and they have little presence in this Peshmerga controlled area. It can only be speculated that how Iraq will respond to the Turkish invasion once the 24 hour ultimatum expires.

The Kuwaiti al-Rai news website quoted an informed diplomat as saying that the US is attempting to gather the forces called by Washington as moderate opposition in one region to create a foothold for the militants’ further expansion in Syria. According to the report, US-supported militants have entered Southwestern Syria which shares borders with Jordan. The reports were rejected by Amman.

SouthFront: Analysis & Intelligence remembers when Russia started air raids on terrorists in Syria over two months ago, some 3,000 terrorists escaped through the border with Jordan. Earlier in May, US defense officials said that at least 400 US military military advicers were ready in Turkey and Jordan to start training of over 3,000 anti-Syria militants to join fight against the government of President Bashar al-Assad.