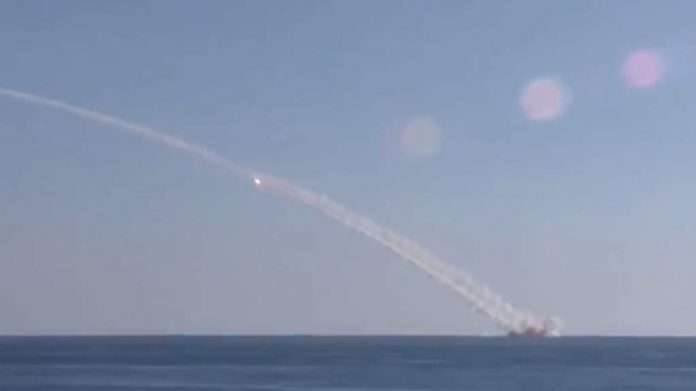 On Dec.9, Russia for the first time hit ISIS targets in Syria with cruise missiles launched from a submarine in the Mediterranean Sea. The 3M-54 Kalibr missiles were launched from the Kilo-class diesel-electric submarine “Rostov-on-Don”. According to the Russian Defense Minister, the missiles targeted the terrorists’ ammunition warehouses, mine production plant and the oil infrastructure in the territory of Raqqa.

In the past three days, the Russian Air Forces have carried out over 300 sorties hitting 600 terrorist targets. All sorties were performed with the backing of Su-30 fighter jets.

The pro-government sources argue that tens of terrorists were killed in clashes between the Syrian Arab Army (SAA) and the militant groups along the Damscus-Homs highway on Tuesday. Thus, the Syrian forces expanded its control on the Eastern side of the Damascus-Homs highway in Harasta.

On Tuesday, the SAA, Hezbollah, the National Defense Forces (NDF) and Harakat Al-Nujaba launched an offensive on the towns of Al-Zorba and Barqoum clashing against Al-Nusra, Harakat Nouriddeen Al-Zinki, Harakat Ahrar Al-Sham and Jaysh Al-Islam. The clashes are continuing in the both towns. If the Syrian forces capture Al-Zorba, they will be able to cutoff the militants’ supply route from Idlib to Aleppo. This operation is a part of the largest offensive of the Syrian forces which is aimed to secure the whole Aleppo-Damascus highway.

Since the start of the Russian military operations in Syria, the pro-government forces have been incrementally advancing in directions of the main strategic areas which allow to control crucial parts of the Syrian logistical infrastructure. It allows the Syrian forces to take advantage on terrorists in the manoeuvre capability while the loyalists already have advantage in the fire power, intelligence and coordination.