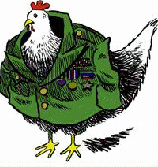 IT SEEMS CALIFORNIA NOW HAS A NEW "STOLEN VALOR" LAW MEANT TO PUNISH PHONY HEROES… SINCE REAL COMBAT VETS KNOW THAT MOST PHONY HEROES ARE THE ONES THE THE MILITARY ACTUALLY AWARDED REAL MEDALS TO, IS CALIFORNIA GOING TO ARREST THEM FIRST?

How do we save real combat vets who, thru some horrible accident may have actually received a personal decoration from being classified as "heroes" with the rear eschelon phonies awarded everything from Bronze Star to Medal of Honor for "ass kissing" along with the people who never served at all?

Anyone who served in a REAL combat unit that has used the word "hero" to describe himself or anyone he has served with is simply a liar.  I was a plain old ordinary grunt, a Marine rifleman.  It is your job every day to go out, get shot at, get scared, run like hell when necessary, and look out for those around you when you can.  We all did exactly the same thing, some better than others, but nothing was ever made of that.

Every one of us saw people around us that would, during lapses in judgement, do "Medal of Honor" type things.  I have seen dozens of such things, perhaps more than that.  None of the people involved were ever given a medal of any kind, other than purple hearts for those who were very very seriously wounded and usually killed.  Minor wounds, like gunshots and fragmentation or burns, seldom qualified for a purple heart unless it was a lifer/officer.

It is time we ended the bullshit and put the liars in their places.  We had a couple of decent war movies/shows in the past few years.  One was, of course, Saving Private Ryan and the other, Band of Brothers.  Note that these shows were done with the full cooperation of real combat veterans.

Also note that whenever "professional soldiers" were depicted, it was as rear eschelon types who couldn’t handle combat, ran away at every instance or simply did nothing at all.

Everyone who fought in these units was a professional civilian, not a "lifer", career "officer" or anything else.  Get the message?

I have never met a combat soldier who was decorated for heroism.  However, I have met dozens of General’s drivers, intelligence clerks, motor pool specialists, supply officers, dockyard supervisers or worse who were awarded everything from Bronze Star to DSC for instances of combat that were either totally fabricated, which I place at 90% or were exaggerated beyond anything recognizable.

After the war, the guys who fought every day went back to jobs, back to school and back to the real world while we were overrun with phony vets and decorated clowns who have spent decades patting themselves on the back, playing the phony hero and using the real sacrifice of others to justify years of undeserved credit.

It is still getting worse,every year.  Not only am I still drowning in phony vets like the Run for the Wall/Rolling Thunder group members I have met (obviously not all but in extremely substantial numbers and carefully VERIFIED AND CATEGORIZED with lots of witnesses, thank you very much) but I now have to hear from properly decorated phonies complaining about the improperly decorated phonies.

Even worse, hundreds of these phonies and blowhards are being planted in Arlington National Cemetary while real fighting men are trying to find a patch to rest somewhere behind an abandoned VA hospital.  Any bullshitter with an "end of tour award" or "salad fork injury" can get into Arlington while the men who belong there will not only be ignored, many now are killing themselves or living under bridges in cardboard boxes hoping the police don’t dump them in a river somewhere.  If only I were joking.

Can’t some sensible person simply lump all of them together, get them the hospital care they need and keep them away from the public.  I have been known to criticize President Bush for his lack of combat service during the Vietnam War when, in actuality, he may have seen more combat at some of his frat parties than hundreds now wearing the Silver Star or better.

The real guys, the few survivors, fewer every day, are constantly bad mouthed by idiotic civilians and worse because none of them have the medals to prove the hundreds of days they spent "at the front" under enemy fire unlike the tourists wearing the ribbons and making the speeches.  Every rear eschelon hero is an insult to the troops that fight and die every day.  It is time they crawl back under their rocks or go back to plying their bull on a backwoods barstool where they belong.

Real heroes have been treated like phonies because the phonies themselves, the ones decorated by our "career advancing" military, has degraded their service and sacrifice by giving away medals by the bushel load to cowards and slackers.

Making this worse, today’s military has created uniforms mean to build "self esteem", giving out beret’s, dickies and all sorts of combat garb to trained professionals of extremely non-combatant specialties.  If you were to tour an airbase today, you would find supply clerks wearing 5 times the medals of an Iwo Jima Marine or D-Day paratrooper.

A couple of years ago, I met a World War 2 Marine Raider, the best and toughest in the history of the Corps, who felt embarassed because he had so many fewer ribbons than me.  By today’s standards, I could barely pass for a clerk at a computer storage depot, much less a combat veteran.

People ask, Gordon, if you were in combat, where are your medals?  All I can say is that I did pick up some awards when I was taken to the rear and did some ass kissing but I only have one combat award.  It is called a CAR, "Combat Action Ribbon".  Any Marine who values anything else is a phony.

Try to remember, when watching a news conference with Generals who look like they belong in the Mexican Army, that they guys who came back from Guadalcanal got ONE RIBBON.  (except for General Vandergrift who gave himself a Medal of Honor, thank you very much).

Remember that the guy you meet with one row of ribbons may have spent a full year in combat while the General who can barely stand up for the weight of his medals probably never saw more than 5 minutes of "combat action" in his entire career.

Print this up.  Take it to any real combat vet.  Ask them if they think anyone calling themselves a hero should be beaten to death.

Take the time.  Really do this, if you can find a real combat vet that isn’t already dead.  You will have to work very hard, I am afraid.

Then, next time you hear about a hero patting himself on the back, you will know how to deal with him.