Home Veterans Nothing Has Changed at Walter Reed 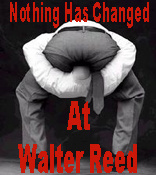 "Nothing has changed [at Walter Reed]. Same facility. None of the recommendations that I made have been implemented and to my knowledge they really aren’t working on it."

Former Army Lt. and military nurse Doug Connor sat down for an interview with Truthout reporter Geoffrey Millard to share his experience before and after the Walter Reed Medical Center scandal broke.

Encouraged by the firings of top military officials as a result of the problems at Walter Reed, Connor spoke out about the dilapidated conditions at Walter Reed. He sent a letter to Gen. Gregory A. Schumacher with recommendations for improving conditions in the Intensive Care Unit (ICU) where there were equipment shortages and outbreaks of infectious bacteria, including extremely dangerous drug-resistant forms of Acinetobacter baumannii, a bacterium that has been ravaging injured soldiers in Iraq and in domestic military hospitals…

The infection problems caused other units within the hospital to lose faith in the ICU’s ability to care for surgical patients. Because of the infections, "the kidney transplant team will not recover their patients in the surgical ICU anymore," Connor said in the interview.

According to Connor, his recommendations were not acted upon. Instead, he claims that he was retaliated against. "I thought he would thank me for letting him know where there were areas that needed to be fixed … I have been retaliated against because of the letters that I have sent out. It is pretty transparent … Everyone that has seen what happened around me is just like ‘yeah, they’re going after you.’"

(In accordance with Title 17 U.S.C. Section 107, this material is distributed without profit to those who have expressed a prior interest in receiving the included information for research and educational purposes. VT has no affiliation whatsoever with the originator of this article nor is VT endorsed or sponsored by the originator. Any opinions expressed by the author(s) are not necessarily those of VT or representative of any staff member at VT.)