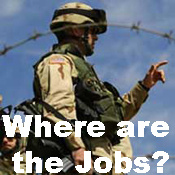 Study says employers reluctant to hire, wages are low for many

WASHINGTON – Strained by war, recently discharged veterans are having a harder time finding civilian jobs and are more likely to earn lower wages for years, partly because of employer concerns about their mental health and overall skills, a government study says.

The Department of Veterans Affairs report, obtained Thursday by The Associated Press, points to continuing problems with the Bush administration’s efforts to help 4.4 million people who have been discharged from active duty since 1990.

The 2007 study by the consulting firm Abt Associates Inc. found that 18 percent of the veterans who sought jobs within one to three years of discharge were unemployed, while one out of four who did find jobs earned less than $21,840 a year. Many had taken advantage of government programs such as the GI Bill to boost job prospects, but there was little evidence that education benefits yielded higher pay or better advancement…

The report blamed the poor prospects partly on inadequate job networks and lack of mentors after extended periods in war. It said employers often had misplaced stereotypes about veterans’ fitness for employment, such as concerns they did not possess adequate technological skills, or were too rigid, lacked education or were at risk for post-traumatic stress disorder.

It urged the federal government to consider working with a private-sector marketing firm to help promote and brand war veterans as capable employees, as well as re-examine education and training such as the GI Bill.

"The issue of mental health has turned into a double-edged sword for returning veterans. More publicity has generated more public awareness and federal funding for those who return home different from when they left. However, more publicity, especially stories that perpetuate the ‘Wacko Vet’ myth, has also made some employers more cautious to hire a veteran," said Joe Davis, spokesman for Veterans of Foreign Wars.

"The federal government needs to accelerate its hiring and training of these young veterans to fill the ranks of the retiring Boomer generation," he said.

‘Government may need to reevaluate’
Separately, a Labor Department report obtained by the AP showed that formal job complaints by reservists remained high, citing concerns about denied jobs or benefits after their tried to return to their old jobs after extended tours in Iraq. Reservists filed 1,357 complaints with the department in 2006, the latest figures available, down from nearly 1,600 in 2005, when complaints reached the highest level since 1991.

While complaints declined in 2006, the Labor Department report noted for the first time that figures in the previous years might have been inflated. That’s because in some cases a single complaint was double counted after the case was closed in one state and then reopened in another state.

"The military has worked on assisting service members in completing and translating their skills to match equivalent civilian job descriptions; however, training for marketability may require much more preparation than having the ability to improve a resume," the VA study said.

"The federal government may need to reevaluate how it serves the needs of returning service members," it said.

VA begins to hire staff for vet help
A Labor Department spokesman had no immediate comment. A VA spokesman declined to comment, saying the report spoke for itself. Last November, the VA announced the initial hiring of 10 full-time staff as part of an effort to help veterans find jobs at the department.

The two reports come as Congress and the Bush administration seek ways to improve veterans’ health care and benefits in light of a protracted Iraq war.

A Pentagon survey of reservists released last year found increasing discontent among returning troops about the government’s performance in protecting their legal rights after taking leave from work. Some legal experts have said those numbers may grow once the Iraq war winds down and more troops come home after an extended period in combat.

In recent weeks, some veterans groups and lawmakers have called for an overhaul of the GI Bill, which provides veterans with money to help them further their education.

The difficulty that veterans have had in finding jobs at higher wages has been going on for some time.

The latest VA study, numbering 199 pages, tracked a statistical sample of 1,941 veterans between the ages of 17 and 61, more than half of whom served in the Army. It found that from 1991 to 2003, about 9.5 percent of recent veterans were unemployed within two years of separation from active duty, compared with 4.3 percent for non-veterans of comparable age, gender and education.

The veterans also tended to have lower wages, although total income was often similar when factoring in disability pay and other government benefits, and to be in low-income families, under $29,000 in income, for up to eight years after separation.

HireVeterans.com is a job board that is devoted EXCUSIVELY to war veterans. If you’re a war veteran, go check out the thousands of jobs listed from top companies that are actively seeking vets! Or if you would like your business listed among those that are Vet-Friendly and are here to support America’s troops with more than a flag on your car or lawn and you want to hire one of America’s Best, please click here: www.HireVeterans.com