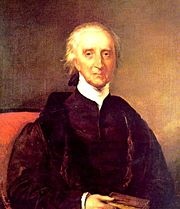 The longest lived signer of the Declaration of Indpendence

Charles Carroll of Carrollton (September 19, 1737 – November 14, 1832) was a delegate to the Continental Congress and later United States Senator for Maryland. He was the only Catholic signer of the Declaration of Independence. He was the longest lived signer of the Declaration of Independence and the Continental Congress. He lived to age 95.

He was born on September 19, 1737 at Annapolis, Maryland, the son of Charles Carroll of Annapolis (1702–1800) (his grandfather was Irish Daniel Carroll) and Elizabeth (Brooke) Carroll. His reputed attendance at the Jesuit preparatory school at Bohemia in Cecil County cannot be confirmed from contemporary records, and he may have been schooled at home before departing for Europe, where he attended the College of St. Omer in France, and graduated from the College of Louis the Grand in 1755. He continued his studies in Europe, and read for the law in London before returning to Annapolis in 1765.

Signer of the Declaration of Independence

Carroll was a voice for independence in Maryland. In 1772 he engaged in a debate conducted through anonymous newspaper letters and maintained the right of the colonies to control their own taxation. As a Roman Catholic, he was barred from entering politics, practicing law, and voting. However, writing in the Maryland Gazette under the pseudonym "First Citizen," he became a prominent spokesman against the governor’s proclamation increasing legal fees to state officers and Protestant clergy. Carroll served on various committees of correspondence.

From 1774 to 1776, Carroll was a member of the Annapolis Convention. He was commissioned with Benjamin Franklin, Samuel Chase and his cousin John Carroll in February 1774 to seek aid from Canada.

He was a member of Annapolis’ first Committee of Safety in 1775. In early 1776, while not yet a member, the Congress sent him on a mission to Canada. When Maryland decided to support the open revolution, he was elected to the Continental Congress on July 4, 1776, and remained a delegate until 1778. He arrived too late to vote in favor of it, but was able to sign the Declaration of Independence. He was the last living signatory of the Declaration of Independence.

His signature reads "Charles Carroll of Carrollton," which is why he has gone down in history this way. At the time he was one of the richest men in America. As he signed, an observer stated "There go a few millions." Throughout his term in Congress, he served on the board of war.

Member of the U.S. Senate

Carroll returned to Maryland in 1778 to assist in the drafting of a constitution and forming a state government. Carroll was re-elected to the Continental Congress in 1780, but he declined. He was elected to the state senate in 1781 and served there continuously until 1800.

When the United States government was created, the Maryland legislature elected him to the first United States Senate. In 1792 Maryland passed a law that prohibited any man from serving in the State and national legislatures at the same time. Since he preferred to be in the Maryland Senate, he resigned from the U. S. Senate on November 30, 1792.

Carroll retired from public life in 1801. After Thomas Jefferson became president, he had great anxiety about political activity, and was not sympathetic to the War of 1812. After both Jefferson and Adams died on July 4, 1826, he became the only surviving signer of the Declaration of Independence. He came out of retirement to help create the Baltimore and Ohio Railroad in 1827. His last public act, on July 4, 1828, was the laying of the cornerstone of the railroad.[2] In May of 1832, he was asked to appear at the first ever Democratic Convention but did not attend on account of poor health.[3] He died on November 14, 1832 in Baltimore, and is buried in his Doughoregan Manor Chapel at Ellicott City, Maryland.

Carroll funded the building of what is known today as Homewood House, a 140 acre (570,000 m²) estate in northern Baltimore, Maryland as a wedding gift to his son, Charles Jr. and Harriet Chew. Charles Jr. then oversaw the design and construction of the house, which began construction in 1801 and had mostly finished by 1808. Research shows that he incorporated suggestions from his wife. It took five years to build and cost $40,000, four times the budgeted expense. The house never fulfilled the family’s expectations, as it did nothing to cure Charles Jr.’s idleness and alcoholism, factors which led to the failure of the marriage by binding separation.

Homewood was donated to Johns Hopkins University in 1876 and later became its main campus. Today, Johns Hopkins operates Homewood House as a museum, and its Georgian architecture serves as the inspiration for the Hopkins’ architecture.

Named in his honor are counties in Arkansas, Georgia, Illinois, Indiana, Iowa, Maryland, Mississippi, Missouri, New Hampshire, Ohio, and Virginia, as well as East and West Carroll Parishes, Louisiana. Carroll County, Kentucky and its county seat, Carrollton, are both named for him. Also named for him is the Carroll Gardens neighborhood in Brooklyn; as well as the city of New Carrollton, home to Charles Carroll Middle School.

In 1903 the state of Maryland added a bronze statue to the United States Capitol’s National Statuary Hall Collection. It is located in the Hall of Columns.

In 1906, the University of Notre Dame constructed what is now known as Carroll Hall, a residence hall named after Charles Carroll.

Charles of Carrollton’s grandfather, Charles Carroll known as Charles Carroll the Settler, was an Irishman from Littemourna, who was a clerk in the office of Lord Powis. Around the year 1659, he emigrated from England to America, thus establishing one of the most influential families in American politics.

Charles’ sole son was born in 1702 and named Charles. To distinguish himself from his father he was known as Charles Carroll of Annapolis, but is not to be confused with his son of the same name

Charles married Mary Darnall, known as Molly, on June 5, 1768. They had seven children before Molly died in 1782, but only three survived infancy: Mary, Charles Jr., and Kitty. Mary married to Richard Caton. From 1820 to 1832, Carroll would winter with the Catons in Baltimore. Charles Jr. (sometimes known as Charles Carroll of Homewood because he oversaw its design and construction) married Harriet Chew and lived in Philadelphia. Harriet was the daughter of Benjamin Chew, the chief justice of Pennsylvania, and her sister married John Eager Howard who had served in the Senate with Charles Carroll of Carrollton. Charles Jr. was an alcoholic who reportedly consumed up to two quarts of brandy a day. This led to erratic behavior that resulted in his separation from Harriet.

One of his granddaughters through Mary married the British statesman Richard Wellesley, 1st Marquess Wellesley, who was the brother of the legendary military commander Arthur Wellesley, 1st Duke of Wellington.

Today, Carroll’s descendants own the largest parcel of land in Howard County, Maryland, with over 1000 acres (4 km²) of valuable, but historically preserved land in Ellicott City, Maryland.

The Carrolls were descendents of the Ó Cearbhaill chiefs of Éile (Lords of Ely) in County Tipperary. A descendant of Irish rebels, Carroll was born on September 19, 1737, in Annapolis, Maryland. The only child of Charles Carroll of Annapolis (1702-1782) and Elizabeth Brooke (1709-1761), he remained illegitimate until his parents married in 1757. Charles (Carroll, of Annapolis) grandfather, Charles Carroll the Settler (1660 – 1720), left his native Ireland (Kings County) because of English discrimination against his faith. Hoping to find a freer existence in the New World, Carroll arrived in St. Mary¹s City, capitol of the colony of Maryland, in 1689. Charles the settler Carroll was the son of Daniel O’Carroll of Litterluna and a distant cousin to Roger, or Roderick (see chart). Roderick (Ruaidhrí) O’Carroll was the son of Sir Maolroona O’Carroll (Maelruanaid Ó Cerbaill), Lord of Ely, Chief of the Name (Chief of his Sept and styled by Sir James Ware, "King of Ely." Additionally, he was Knighted at Dublin July 25, 1603 by Sir George Cary, Lord Deputy of Ireland), who was in turn son of Sir William O’Carroll, Lord of Ely. Sir William Odhar was Knighted at Limerick March 30, 1567, by Sir Henry Sydney, Lord Deputy of Ireland, succeeding his brother Teige O’Carroll as chief of Clann Cian or the Ciannachta. Tiege Caoc O’Carroll, King of Ely O’Carroll, last Irish sovereign of Ely, in the face of mounting pressure from English surrendered his Kingdom and paid Homage to Edward VI who made him a Baron and granted the title Lord of Ely O’Carroll in 1552 but the Patent or Record of the Patent has never been found. A descendant of John O’Carroll, Lord or Ely settled in in Maryland, Dr. Charles O’Carroll of Annapolis.

The "O’" in Irish surnames was often dropped due to the Anglicisation policy of the occupying English, particularly during the period of the "Penal Laws".

Charles Carroll was portrayed by actor Terrence Currier in the 2004 film National Treasure starring Nicolas Cage. He is accurately described as the last living signatory of the Declaration of Independence. Carroll is also described as a Freemason in the film; the Catholic Church did not allow Catholics to be Freemasons at that time so he would have had to join the fraternity secretly, which is highly unlikely. Also, although the film does not explicitly state it, it is implied that Carroll died in Washington, D.C. A scene which did not make the final cut of the film (but appears as a deleted scene on the DVD) shows then-President Jackson rushing out of the White House to find Carroll’s body in a carriage.

In the 1940s, newspaper journalist John Hix’s syndicated column "Strange As It Seems" published an interesting (though unverified) explanation for Charles Carroll’s distinctive signature on the Declaration of Independence. Every member of the Continental Congress who signed this document automatically became a criminal, guilty of sedition against King George III. Carroll, because of his wealth, had more to lose than most of his companions. Some of the signators, such as Caesar Rodney and Button Gwinnett, had unusual and distinctive names which would clearly identify them to the King; other signators, with more commonplace names, might hope to sign the Declaration without incriminating themselves.

According to Hix, when it was Carroll’s turn to sign the Declaration of Independence, he rose, went to John Hancock’s desk where the document rested, signed his name "Charles Carroll" and returned to his seat. At this point another member of the Continental Congress, who was prejudiced against Carroll because of his Catholicism, commented that Carroll risked nothing in signing the document, as there must be many men named Charles Carroll in the colonies, and so the King would be unlikely to order Carroll’s arrest without clear proof that he was the same Charles Carroll who had signed the Declaration. Carroll immediately returned to Hancock’s desk, seized the pen again, and added "of Carrollton" to his name.

However, some believe that Carroll was using the "of Carrollton" suffix signature at least as early as September 15, 1765, in a letter written to a friend in England.