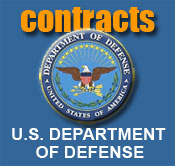 BAE Systems, Inc., Austin, Texas is being awarded a $49,952,872 firm-fixed price, indefinite-delivery/indefinite-quantity contract for procurement of Driver’s Ground Mobility Visual Augmentation System (DR-GMVAS) and associated data. The DR-GMVAS is a vehicle mounted thermal imaging system that enhances visual range and image detection on the road ahead and road behind in all light and weather conditions. The system fuses infrared and low-light images and transmits the enhanced images to a monitor inside the vehicle. Work will be performed in Austin, Texas, and is expected to be completed by Jul. 2013. Contract funds in the amount of $1,394,050 will expire at the end of the current fiscal year. This contract was competitively procured with nine proposals solicited and one offer was received via FedBizOpps. The Naval Surface Warfare Center, Crane Division, Crane, Ind., is the contracting activity (N00164-08-D-JQ02).

W. M. Schlosser Co., Inc., Hyattsville, Md., is being awarded an $11,977,000 firm-fixed price contract for design and construction of a Turbo Prop Jet Engine Test Facility at Marine Corps Air Station New River, N.C.  The facility will include four turboshaft engine test cell enclosures for testing four turbo shaft engine types: T58, T64, T400 and T700. Work will be performed in Jacksonville, N.C., and is expected to be completed by Jan. 2010. Contract funds will not expire at the end of the current fiscal year. This contract was competitively procured via the Naval Facilities Engineering Command e-solicitation website with four proposals received. The Naval Facilities Engineering Command, Mid-Atlantic, Norfolk, Va., is the contracting activity (N40085-08-C-1410).

Compass Systems, Inc.*, Lexington Park, Md., is being awarded a $9,020,396 modification to a previously awarded cost-plus-fixed-fee contract (N00421-07-C-0011) to exercise an option for research and development for various Command, Control, Communications, Computers, Intelligence, Surveillance, Reconnaissance, and Targeting (C4ISR&T) programs, sensors, mission and targeting systems, communication suites, and small aircraft vehicle systems. These efforts are in support of the Roll-On Roll-Off Sensor System for the Contingency Airborne Response Program. Work will be performed in Yuma, Ariz., (45 percent), Washington, D.C., (25 percent), Reston, Va., (25 percent), and Patuxent River, Md., (5 percent), and is expected to be completed in Jul. 2009. Contract funds in the amount of $1,832,144 will expire at the end of the current fiscal year. The Naval Air Warfare Center Aircraft Division, Patuxent River, Md., is the contracting activity.

MKI Systems Inc., Woodbridge, Va., is being awarded $6,068,278 for task order #0068 under previously awarded firm-fixed-price contract (M67854-02-A-9008) to provide professional support to the Joint Mine Resistant Ambush Protected Vehicle Program. The Contractor shall provide expert support directly to the Joint Program Manager (JPM) and Deputy PMs; Assistant PMs for vehicles including Cougar; RG-33; MAXXPro; RG-31; Caiman; Buffalo and MRAP II; and the following functional managers: Integration and Government Furnished Equipment, International Programs, Acquisition, Contracts, Production/Quality, Logistics, Engineering (including Spiral Development) and Test & Evaluation.  Work will be performed in Stafford, Va., and work is expected to be completed in Jan. 2009. Contract funds in the amount of $6,068,278.00 will expire at the end of the current fiscal year. The Marine Corps System Command, Quantico, Va., is the contracting activity.

Saft America Inc., Valdese, N.C., is being awarded a maximum $64,892,611.68 firm fixed price, indefinite quantity contract for batteries. Using services are Army, Navy, Air Force and Marine Corps. There were originally four proposals solicited with two responses. This contract has a base period of two years and three one-year options. Contract funds will not expire at the end of the current fiscal year. The date of performance is Jul. 16, 2010. The contracting activity is Defense Supply Center Richmond, Richmond, Va., (SPM4LG-08-D-0013).

The Air Force is modifying a cost plus fixed fee with performance incentives contract with McDonnell Douglas Corp., a wholly-owned subsidiary of the Boeing Co., of St. Louis, Mo., not to exceed $6.8 million. This contract action will identify, define, design, and test a solution common to the Small Diameter Bomb, Increment I (SDB I) Guided Test Vehicle and tactical weapon in accordance with findings and recommendations for the fusing system failure investigation. The solution shall be verified to ensure that SDB I system performance is not degraded and complies with the SDB I System Performance Specification (SPS) while complying with current safety requirements. At this time $3.4 million has been obligated. 918 ARSG/PK, Eglin, Air Force Base, Fla., is the contracting activity (FA8681-06-C-0210, P00036).