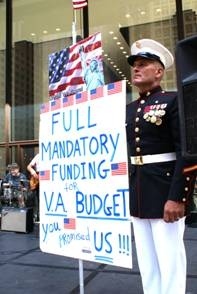 On August 29th, Operation Firing For Effect hosted the first annual Veteran’s Awareness Day March & Rally at Daley Plaza. The event was designed to bring the much needed attention to veterans healthcare funding and related issues.
Among the highlights of the Rally was the public debut of 5 audio public service announcements produced by OFFE and featuring country music celebrity, Willie Nelson.

Nelson, (U.S Air Force veteran) is national celebrity spokesperson for OFFE, and a leader in the nationwide grassroots movement for full mandatory funding of veterans healthcare and related services. The Willie Nelson public service announcements were well received and attendees of the rally were inspired by Willie’s words.

Marine Veteran activist Dirk Enger stands vigil during entire 4 hour OFFE Rally. He is also co-founder of Midwest Shelter for Midwest Homeless Veterans. In one of the Willie Nelson/OFFE public service announcements Willie appeals to all Americans to unite. Mr. Nelson states: “We have a moral and ethical obligation to our veterans to provide them quality and accessible healthcare. This is Willie Nelson asking everyone from across the nation, to unite for the common good of our veteran population. We can do so much better.” 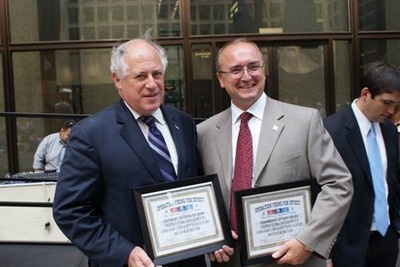 commitment to full funding of the VA if he is elected. Senator Obama wrote: “Members of Operation Firing For Effect (OFFE) are a group of committed patriots who represent the interest of those who have risked their lives for our great nation. Their mission reminds us of the sacred responsibility we have to those who protect us, and we cannot stand to let them down anymore.”

To hear the Willie Nelson/OFFE public service announcements, visit this link; http://www.stardustent.com/offemedia.htm Video versions will be released within the next two week. 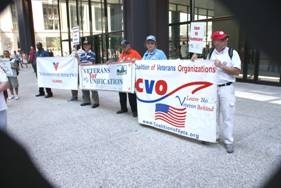 "The willingness with which our young people are likely to serve in any war, no matter how justified, shall be directly proportional to how they perceived veterans of earlier wars were treated and appreciated by our nation."  George Washington .