Texans to a large extent were responsible for their own amazing survival by choosing to heed the call to evacuate which left officials to focus on pre-positioning equipment and personnel.   IKE bobbed and weaved for a while but could not outwit the Texas disaster recovery machine.

As part of this massive Texas effort, Governor Rick Perry placed up to 7,500 Texas Military Forces personnel and assets on State Active Duty to outwit an equally enormous storm long before it made landfall. 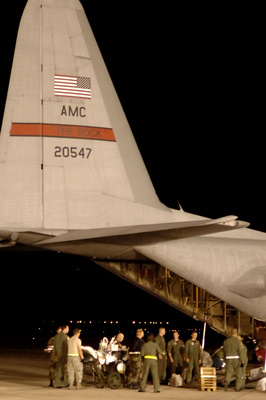 At 8:00 Saturday morning, hours after IKE’s landfall, Texas Army National Guard aviators assisted by 55 aircraft from nine states and the District of Columbia, the Coast Guard and DPS flew 394 air rescues and 470 sorties.   These search and rescue flights will continue as long as weather cooperates.

Ground troops rescued 1,554 people and assisted with 639 evacuations.   Home and structural damage assessments are ongoing with an early number of 500, but these numbers will undoubted increase in days to come.

To continue damage assessment and recovery efforts, taskforces have spread across the devastated areas in Galveston, Lufkin, Beaumont and Houston.   Two local landmarks, the Tulley Stadium and the Ford Center are currently being used to disperse equipment and personnel.

Many roads are still inaccessible to normal traffic because of fallen trees, debris, wires and water and to that end skilled drivers in their high profile vehicles will plow through and bring relief to those who may still be stranded.   Local radio stations have taken the initiative to start an ice distribution center, and cars are lining up to take advantage of the service.  Texas Military Forces personnel have also establish points of distribution centers at local landmarks and do curb-side delivery of ice, water and MREs.

There is still a lot of work to be done but the affected communities and its people can count on the Texas  spirit of volunteerism and  their Texas Military Forces.