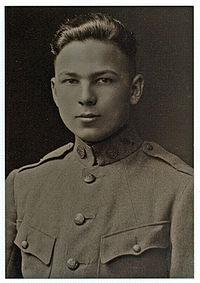 Buckles was born in Bethany, Missouri. He enlisted at the beginning of the United States’ involvement in World War I in April 1917. Only sixteen at the time, Buckles was asked, from the Army recruiter, his age and to show a birth certificate; Buckles replied, “When I was born in Missouri, they [the state] didn’t give out [issue] birth certificates and the only record we kept was in the family Bible and I am not bringing that down here, so…they took me". Before being accepted into the United States Army, he was turned down by the Marines due to his weight.

In 1917, the sixteen-year-old Buckles was sent to France on the RMS Carpathia, the same ship that had rescued the survivors of the Titanic sinking five years before. During the war, Buckles drove ambulances and motorcyles for the 1st Fort Riley Casual Detachment section of the U.S Army. After the Armistice in 1918, Buckles escorted prisoners of war back to Germany. Following his discharge, in 1919, he attended a memorial service in Kansas for those who died in World War I and there he met General Jack "Blackjack" Pershing.

Mr. Buckles returned to Germany in 1936 and would stay there until 1938, where he met Adolf Hitler. Before World War II, in the 1920s, he worked for the White Star Line in Canada. During World War II, Buckles was a civilian working for an American shipping line or company in the Philippines. He was captured by the Japanese in 1942 and spent three years in a prison camp Los Banos and was rescued on February 23, 1945. In 1953, Buckles married and bought a 330 acre farm in West Virginia. His wife died in 1999.

Buckles currently lives in Charles Town, West Virginia. Mr. Buckles replies to all people who tell him he lied about his age saying, “I did not lie about my age and whoever says I did is calling me a liar and I don’t appreciate being called a liar". Buckles stated in an interview with The Washington Post on Veterans’ Day 2007 that he believes the United States should only go to war "when it’s an emergency." When asked how he could live so long, Buckles replied, "Hope". He also said,"When you start to die…don’t" (he chuckles. He also said the reason he has lived so long,"I never got in a hurry". 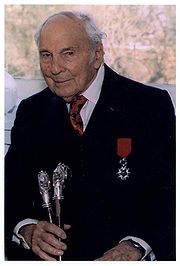 The U.S. Library of Congress included him in its Veterans History Project and has audio, video and pictorial information on Buckles’ experiences in both world wars, including a full 148-minute video interview.[5] His life was featured on the Memorial Day 2007 episode of NBC Nightly News. On March 6, 2008, he met with President Bush at the White House.  The same day, he attended the opening of a Pentagon exhibit featuring photos of the nine surviving World War I veterans. Of the group, only Buckles and Canadian veteran John Babcock are left. Babcock was unable to attend.  Buckles (right) with United States Secretary of Defense Robert Gates.

Buckles has said he will be buried at Arlington National Cemetery. He was eligible for cremation and placement in a columbarium at Arlington, but expressed a desire for burial there, which he was not eligible for under current Arlington policy. Friends and family members took up his cause, but made no headway until a family member, Ken Buckles, contacted Ross Perot, whom Frank had met at a history seminar in 2001. Within two weeks, Perot had successfully intervened with the White House,and Buckles received special approval for underground burial at Arlington on March 19, 2008.

Buckles pictured at 103, was awarded the French Legion of Honor military decoration

Buckles was awarded the Legion of Honor by then French president Jacques Chirac.

On May 25, 2008, Buckles received the Veterans of Foreign Wars’ Gold Medal of Merit at the Liberty Memorial. He sat for a portrait that will hang in the National World War I Museum, as "the last surviving link."