Operation Firing For Effect (OFFE) is a veteran’s advocacy group devoted to the improvement and protection of benefits and entitlements earned by our men and women in uniform. According to OFFE National Chairman Gene Simes military personnel returning home from Iraq and Afghanistan are in danger of unjustly losing their earned disability compensation to elements and non-military individuals outside the Department of Veterans Affairs.

United States Code, Title 38, Veteran’s Benefits, is the governing document created by the U.S. Congress for the administration and protection of benefits, entitlements, and healthcare services earned by persons honorably discharged from the U.S. military, spouses, dependents, and widows of former military personnel. The Department of Veterans Affairs is the sole agency responsible for enforcement and interpretation of the contents of USC, Title 38. According to the Department of Justice, the ultimate responsibility for all actions taken/or not taken under USC, Title 38 falls squarely on the shoulders of the Secretary of the Department of Veterans Affairs. 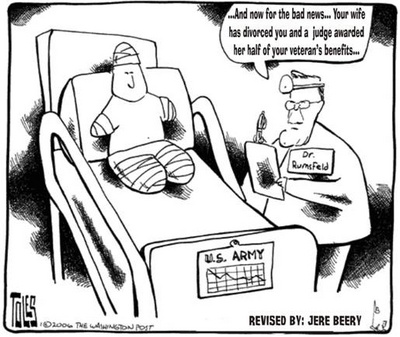 USC, Title 38, Section 5301(a) – 1) Payments of benefits due or to become due under any law administered by the Secretary shall not be assignable except to the extent specifically authorized by law, and such payments made to, or on account of, a beneficiary shall be exempt from taxation, shall be exempt from the claim of creditors, and shall not be liable to attachment, levy, or seizure by or under any legal or equitable process whatever, either before or after receipt by the beneficiary.

In spite of this VERY focused and explicate language, every day in civil court rooms across the country disabled veterans are being forced to use their earned disability compensation as a divisible asset in a divorce settlement, or go to jail for contempt. In a blatant violation of USC, Title 38, most family court attorneys and civil court judges have wrongly concluded that the federal law does not apply to them or their court proceedings. Nothing could be farther from the truth. Contrary to the opinions of some, there is no gray area here. When the federal law states; ‘under any legal or equitable process whatever, either before or after receipt by the beneficiary’, that means exactly that. USC, Title 38 makes NO exception for civil court rulings. You don’t have to be a law school graduate to understand plain and simple English.

Operation Firing For Effect is currently monitoring over 40 cases nationwide where severely disabled veterans are being ordered to use their earned disability compensation to pay alimony or spousal support to a non-military able body ex-spouse. In a number of these cases the disabled veteran has spent months in jail for refusing to give up their disability compensation to a third party.

Although USC, Title 38 is extremely clear about the protection of disability compensation, the Department of Veterans Affairs refuses to enforce the laws outlined in Title 38. This inaction by the VA leaves the veteran with no other recourse but to pay the court order or go to jail.

Operation Firing For Effect is currently warning active duty personnel (man, or woman) of the waiting ambush they face if they should fall victim to an ugly divorce upon returning home. OFFE is recommending all military personnel consider filing a premarital/prenuptial agreement designed specifically to protect veterans’ benefits from consideration as a divisible asset in a divorce. OFFE is also exploring the possibility of filing a class-action suit against the Department of Veterans Affairs for failure to enforce the federal statues that protect veteran’s benefits from third party awards. The Department of Veterans Affairs has an obligation to our veterans to protect their benefits and entitlements from abuse and theft. OFFE has an obligation to our veterans to insure the VA does just that.

For more information on this issue, visit; http://jerebeery.com/5301%20Club.htm