Home Military Recall of the IRR and STOP LOSS most likely will continued under... 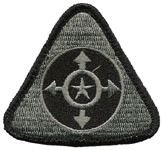 Despite recent Pentagon media releases and statistics (late 2008) claiming that military recruiters are meeting their goals that each service is meeting or surpassing their recruitment goals for FY2008, and that a failing economy has proven a boom for military recruitment, does DoD still find it necessary to recall the IRR and implement Stop Loss under our new Commander-In-Chief. I think so, however.

First there remains a debate between independent sources allied with progressive think tanks versus ultra-conservative think tanks allied with Pro-War supporters, and Pentagon official statements about recruiting and using the IRR and Stop Loss that opponents claim are abusive in nature, and of course the Pentagon claims have been myths spread by those who question 911s association with Iraq, or the War on Terror in general.

The debate has become so controversial, complex, and as the Pentagon believes requires debunking the myths and misconception s of IRR and Stop Loss abuse. In fairness to those who view the continued exploitation of the IRR and Stop Loss as lucrative business management practices, the arguments have become so prevalent on the internet that both terms and the debate have made it into online encyclopedias making them one step away from the history books. In fact nation master encyclopedia that is used by college students as a research tool gives a balanced and accurate rundown of how the IRR system really works, and how it has historically been used or misused during the Global War on Terror (GWOT). You name it from America Supports Bush.mil to recalling the IRR or rationalizing Stop Loss and everything is done in the name of the GWOT in which what less than 0.1% of American citizen s believe in let alone desire to participate. HINT: this link provides an in depth explanation based on accurate Pentagon data under which circumstances an IRR member can request Delay, Deferment, & Exemption (DD&E) from immediate recall to Iraq or Afghanistan. DD&E is the disqualifying factors which may 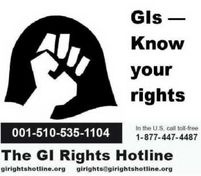 exclude a service member from immediate activation; however it is also a double edged sword as part 2 of this 2 part

special report will show. In part 2, I’ll present information from Courage to Resist, the National Lawyers Guild Military Law Task Force, the GI Rights Hotline. This information is based on testimony from the direct experience, and lessons learned from IRR resisters, GI rights counselors across the country, and civilian lawyers specializing in military defense. I feel it necessary and balanced to give both sides of the debate, and follow-up with what Courage to Resist working with IRR members who have successfully avoided recall (the Draft in their opinion) and Legal counselors that have experience dealing with IRR members to either fail to report as G.W. Bush did during Vietnam, or outright refuse to redeploy or be recalled. There are bureaucratic, administrative, and legal alternatives to either reporting or outright challenging the Pentagon system. Word of caution, you challenge the DOD system and YOU lose, the lower your rank THE MORE YOU LOSE!

I believe readers will find the debate insightful, and I will leave it to you to see strengths or weaknesses in each argument unless I see something glaringly missing in action as a reliable source of link to accurate data in your responses, then of course I’ll ignore you.

Robert L. Hanafin
Major, U.S. Air Force-Retired
Staff Writer, Veteran Today
Military Families Speak Out-Ohio PS: MFSO as an organization is not united in my views and opinions on moving the focus of war from Iraq to Afghanistan to do it better than Busho, but I believe WE are united in opposition to and believe there is abuse of both the IRR and Stop Loss in order to avoid the draft and not have to demand national sacrifice to win the War on Terror.

My apolgies, but I’m still gathering and analyzing Pentagon data that can be used public source, and the Pentagon offers alot that must be properly placed in context. I want to give as much of both sides of the story as possible, so I will continue when I finish looking at the Pentagon side of the story myself. It is only fair to explain why and who at the Pentagon view both Stop Loss and recall of the IRR as myths and distortions from the Pro-Peace movement, and mentioning THE DRAFT of course is TABOO. We want the best Armed Forces we can pay for NOT national self sacrifice or national commitment to win any war or peace.