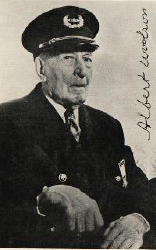 The last surviving veteran of any particular war, upon his or her death, marks the end of a historic era. Exactly who is the last surviving veteran is often an issue of contention, especially with records from long-ago wars. The "last man standing" was often very young at the time of enlistment and in many cases had lied about his age to gain entry into the service, which confuses matters further.

There were sometimes incentives for men to lie about their ages after their military service ended. In addition, there were some impostors who claimed to have served but did not (such as Walter Williams, who claimed to be 117 in 1959). For example, many former Confederate States in the South gave pensions to Confederate veterans of the American Civil War. Several men falsified their ages in order to qualify for these pensions, especially during the Great Depression; this makes the question of the identity of the last Confederate veteran especially problematic. The status of the officially recognized "last Confederate veteran" is in dispute.

Albert Woolson of Minnesota was a Union drummer boy who died in 1956, and the Civil War’s last authenticated survivor.

Comrade Woolson was born in the New York farm hamlet of Antwerp, 22 miles northeast of Watertown, on February 11, 1847, the same day that Thomas Alva Edison, the inventor, was born. Willard Woolson, his father, was a carpenter in Watertown and apprenticed his son to the trade. The senior Woolson, however, had a second vocation. He was a musician, and when President Lincoln called for 75,000 volunteers in 1861, he and his fellow musicians enlisted in a body. When his family did not hear from him for more than a year, they traced him through Army records to a hospital in Minnesota suffering from a leg wound received at the battle of Shiloh. Shortly after the family was reunited, his leg had to be amputated and he died. 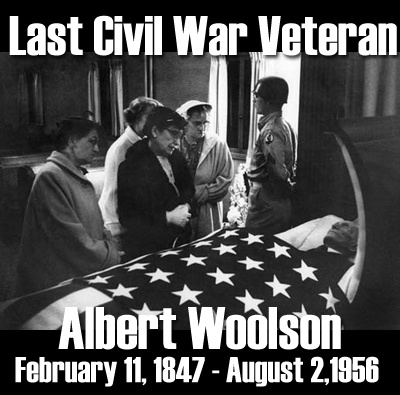 Minnesota’s manpower was stretched thin to furnish its quota for the Union forces and at the same time to hold back the Sioux Indians, who were off the reservation in 1863. The Union needed heavy artillery and Col. William Colville organized a Minnesota heavy artillery regiment of 1,800 men. Albert Woolson got his mother’s consent and was accepted into Company C, First Minnesota Volunteer Heavy Artillery. His military service dated from October 10, 1864. Enlisted as a rifleman, he eventually was assigned as a drummer and bugler. Late in 1864, the Regiment joined the Army of the Cumberland in Tennessee. It was commanded by Maj. General George H. Thomas, known to history as The Rock of Chickamauga, but more familiarly to his men as Pap.

The First Minnesota sat out the spring and early summer of 1865 in the shadow of Lookout Mountain, near Chattanooga, and in August the Regiment was ordered home. Comrade Woolson received his discharge on September 7, 1865.

Comrade Woolson was a member of and participated in the last Grand Army of the Republic National Encampment in Indianapolis, Indiana in 1949, and was the last surviving member of that Organization.

On August 2, 1956, Comrade Woolson died at the age of 109 years. He had been hospitalized for nine weeks with a recurring lung congestion condition. He lapsed into a coma five days before his death and did not regain consciousness. Members of his family were at his bedside when he died in St. Luke’s Hospital, Duluth, Minnesota. In Washington, President Eisenhower said, The death of Mr. Woolson brings sorrow to the hearts of Americans. The American people have lost the last personal link with the Union Army.

On August 6, 1956, Comrade Woolson, the Union Army veteran who outlived all his comrades, was laid to rest in the family plot in Park Hill Cemetery, Duluth, Minnesota. as thousands paid final tribute.

More than 1,500 persons attended the 2 P.M. funeral in the Duluth armory, hundreds more lined the route to the cemetery, and about 2,000 watched as the bronze casket was set down with full military honors.

At 1:45 P.M., an army drum and bugle corps, stationed outside the armory with an army marching unit of 109 men (one for each of Comrade Woolson’s years), blew retreat. A military guard of honor, lining the walk to the armory door, snapped to attention. Military men saluted and the Fifth Army Band played a funeral processional.

Six Army Sergeants, acting as pall bearers, carried the casket into the armory, following Lt. Col. Augustine P. Donnelly, a Presbyterian chaplain attached to Fifth Army Headquarters, Chicago. As the procession entered the armory, the Carillon Chorus Club sang the Battle Hymn of the Republic. Col. Donnelly, who conducted the services, started the ceremony at 2:03 P.M. with, I am the resurrection and the life, saith the Lord. The service ended with a short prayer at 2:45 P.M.

The procession left the armory with the band – the drums were decked in black – playing Chopin’s Funeral Dirge. Behind the band came the army marching unit plodding in slow cadence in the 85 degree heat. At 4 P.M. the band’s drums could be heard at the cemetery.

The Mt. Vernon, Ohio, Fife and Drum corps of the Sons of Union Veterans of the Civil War took over the procession’s lead at the cemetery gate and played Onward Christian Soldiers. The color guard followed the fife and drum corps. Behind them marched Col. Donnelly. Then came the hearse and numerous automobiles.

At 4:17 P.M. pall bearers brought the casket and Col. Donnelly presented a short funeral oration. The pall bearers, who had been holding the casket flag two feet above the casket, folded it and gave it to Secretary of the Army Bruckner, who in turn presented it to Mrs. Kobus.

The Grand Army of the Republic funeral service was then performed by members of the Sons of Union Veterans of the Civil War, as they placed a wreath, a rose, and a miniature United States flag atop the casket.

An army firing squad fired three volleys. The bugler sounded Taps while military men saluted. The group was silent. The firing squad marched away. The fife and drum corps faded into the distance with the fifes whistling the Battle Hymn of the Republic.

The last surviving Civil War general was Brevet-Brigadier General Aaron S. Daggett of Maine, who died in 1938 at age 100. However, others who served in the war and were later promoted to General survived into the 1940s.

On the Confederate side the answer is somewhat more difficult to confirm.

An article by historian William Marvel, published in Blue and Gray magazine in February 1991, and titled "The Great Impostors," names Pleasant Crump of the 10th Alabama, who died in 1951, the last Confederate vet. Prior claimants to the distinction included Walter Washington Williams (who died December 19, 1959) of Texas and John Salling (who died March 19, 1959) of Virginia. A thorough check of official census records by Marvel suggests that both Williams and Salling were too young to have served.

We went back to the search results to substantiate our findings, only to discover that the reference desk at the Chicago Public Library, in answer to the very same question, still lists Mr. Walter W. Williams as the last Confederate survivor, despite the fact that the page was updated in April, 1999.

Looking for more? The real-life last Confederate widow, Mrs. Alberta Martin died in 2004. It is to be a celebration of Confederate heritage. "Old times there are not forgotten…"