Operation Firing For Effect (OFFE) is currently engaged in the battle to enforce federal protection of veteran’s disability benefits in civil courts. Over the past 6 years OFFE has been the standard barer in efforts to enforce USC, TITLE 38, 5301.

OFFE has been a leader in the grassroots movement to protect veteran’s disability compensation from third party awards in a divorce and/or bankruptcy. The frontlines in that heated debate were clearly defined this past week when a 4-man OFFE delegation put booths on the ground in Davenport, Iowa. 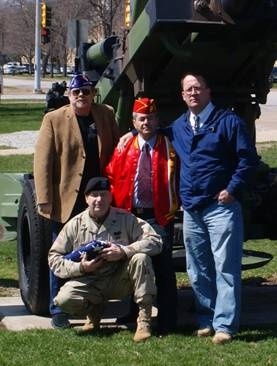 After the incident in Iowa 3 weeks ago, when State Representative Zirkelbach alleged Jere Beery made threats against him, and which were later proven unfounded by the Iowa Division of Criminal Investigation (DCI), it was inevitable that OFFE visit the Great State of Iowa.

The battle lines now go straight through the heartland of Iowa. And thus far, the most effective rounds of the battle have been fired by Operation Firing For Effect.

The severely disabled Iowa veteran needed support protecting his VA disability compensation from use as a divisible asset in an Iowa divorce court. Within 12 hours from receiving the call Gene Simes and Jere Beery were on the ground in Davenport, Iowa to assist this veteran.

On Thursday, Simes and Beery met with OFFE Iowa Co-Director of Operations, Howard Mingin. Mingin, a disabled Iraqi Freedom War veteran, had arranged for media coverage of the story by the local NBC affiliate, TV6, in Davenport, Iowa. By Thursday afternoon, the OFFE team met with TV6 Reporter and Anchorwoman, Erika Cervantes.

For over an hour Ms. Cervantes interviewed the men and video taped the first segment in a 2 part series on the story. You may view that first segment at the following link.

On Friday, OFFE Iowa Director of Operations, Jerry Bohr joined the OFFE team in Davenport. Bohr is a State of Iowa Veterans Service Officer and well versed on the subject of protection of disability compensation from third party awards in civil courts. Once again, Erica Cervantes interviewed the OFFE delegation concerning their battle. For the second night in a row the story was one of the lead stories on TV6 the 10 pm News broadcast. That video will be available soon.

In addition to the professional coverage by Ms. Cervantes and TV6, the OFFE team met for over an hour with Iowa State Senator, Shawn Hamerlinck. The Senator is spearheading an attempt to revive HF 170 in the Iowa General Assembly before the end of this session in the next two weeks. Senator Hamerlinck feels this issue is way too important an issue regarding our returning injured troops both male and female to wait until next year.

According to OFFE National Chairman, Gene Simes, the OFFE team had a positive reception in Iowa, and he is confident the story is on the brink of going national. “If Iowa misses this opportunity to show their support for our troops by protecting their earned disability compensation, California will gladly take the lead on this issue and pass SB 285,” Simes concluded.

If you would like to know more about this issue, or wish to push the effort in your state, visit OFFE AREA 5301; http://jerebeery.com/AREA%205301.htm

A special ‘Thank You’ to American Legion Post 26 for hosting the TV6 and OFFE interviews in their beautiful new Davenport location.

[NOTE:] The identity and personal information concerning this disabled veteran is confidential at this time, as the case is currently SEALED and under a temporary court order. It is our understanding the veteran could be held in contempt of court for publicly disclosing details surrounding his case prior to a final ruling. Once a case reaches a final settlement, the veteran may go public with their story without fear of repercussion.