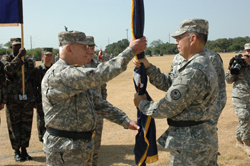 CAMP MABRY, Texas – "Sound Attention, Sound Adjutants Call"! With this command, Texas State Guard J-1 Colonel Baldemar Cano launched the military tradition known as "Change of Command".  Under a hot, bright July 25, 2009 sun on the Camp Mabry parade field, Lieutenant General (TX) Christopher J. Powers, relinquished command of the Texas State Guard to Major General (TX) Raymond C. Peters. Lt. Gen. Powers, in command since 2006, reflected that he was "deeply honored by those in attendance "and acknowledged "the literally thousands of Soldiers, Marines and Airmen he had served with in his 40 years in the military".

Lt. Gen. Powers thanked his family and particularly his wife Patricia, for the sacrifices they made during his career. Lt. Gen. Powers had high praise for the Texas State Guard, remarking that "thousands of Texans may never know your names, but will never forget your presence", referring to the many call-ups of the State Guard for state active duty, particularly during the 2008 hurricane season. He continued, "They will go anywhere, do anything, take on any mission; these are truly amazing people".

The ceremony was presided over by Maj. Gen. Jose S. Mayorga, The Adjutant General of the Texas Military Forces. During the awards presentation, Maj. Gen. Mayorga commented to Lt. Gen. Powers that "The governor had a special trust in you, a dedicated warrior, to command the State Guard," and while the 36th Infantry Division played the tune "She Wore a Yellow Ribbon", Mrs. Powers was presented with a bouquet of yellow roses for her support of her husband.

Maj. Gen. Mayorga also welcomed Maj. Gen. Peters, saying: "You were selected to command the Texas State Guard due to your competence and commitment. I look forward to your service."

The highlight of the morning was the actual change of command where the Texas State Guard Colors were handed by Senior Enlisted Advisor Command Chief Master Sergeant (TXSG) Harold L. Higgins to Lt. Gen. Powers, who handed them to Maj. Gen. Mayorga, as custom dictates, then passed the flag to Maj. Gen. Peters, who finished the ceremony by entrusting them again to Chief Master Sgt. Higgins, completing the circle of command.

When asked how he felt about assuming command of the Texas State Guard, Maj. Gen. Peters said: "45 years ago, I stood out here on this very same parade field and never imagined that I’d be back here promoted to the rank of Major General. I consider it an honor and a privilege to command the Texas State Guard and am blessed to take command of the finest volunteer organization in the nation."