My beautiful farm in in the Northern California Delta.  When I came home from Nashville at the end of 2004, I said ‘goodbye’ to Music Row where I had lived for 20 years and was dead set on retiring and becoming a farmer.  I am now living in my dream, and thinking occasionally about moving to West Virginia to get a job in a coal mine because this retirement dealie is killing me!

So, some months ago I decided to take a ‘working vacation’ and go fly fishing on the Eastern side of Idaho.  My buddy who takes me striped bass fishing here has been going to that area for years deep lining for big trout.  The more I studied the area, the more I realized it was right up my ally with the recent release of my newest record, "LT Bobby Ross – The Fisherman".

So after a week of recording my newest Nashville record with my music producer here taking my 4 vocals on the music tracks laid the weeks before by a team of great Nashville studio musicians, I hung it up, caught a Delta flight to Salt Lake City, and then a puddle jumper to Jackson Hole, and I was in Fly Fishing Capital of the World. 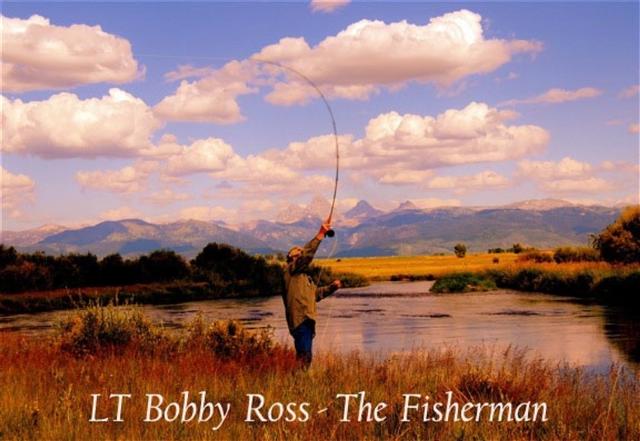 I needed pictures for my new album, so I have a couple photographers waiting for me, and I made a deal with one of them to be my chauffeur, and we headed for Driggs, Idaho.  About an hour later, we arrived and after talking with many of the locals at the fly fishing shops, had our first 3 sites to check out for fishing.   We reconned the area that Sunday, bought all the flies and equipment, along with a 6 day Idaho fishing license, and I found myself stumbling into another Paradise.

I ended up going as far North as Island Park, Idaho above Ashton.  I fished several rivers including Bitch Creek and Henrys Fork.  But Teton River was the water I settled into and decided to conquer.  The view of the Grand Tetons looking towards the East was so totally awesome that words escape me to describe them.  So, I’ve included them in my pictures.

Remember, I am a fisherman, but I have not fly fished for many a year.  So, a friend here at the hunting club loaned me a very good fly rod, and gave me the reel.  I had the Sacramento Fly Fishing Company get me all rigged, and gave me advice on who to hook up with once I got to Jackson Hole.  I was very rusty that first shot at it on Monday morning, but being the good ole LRRP of the 2/17th CAV in the 101st Airborne Division in 1968, my first day on the ground got better after giving that rod a few shots cleaning out its bore.

Like riding a bicycle after 30 years of using only 4 wheeled vehicle, I got on it pretty quick.  And by the end of my first day, I had it down to an art form.  Which fly fishing is:  an art and a religion.  I was hooked.  For the rest of the week, I spent my time mostly on the Teton River.  My photographers were busy, too.  And we got around 2500 shots in total, so we did take a very large body count on my Nikon 200 digital camera.  And we captured my album cover on shot 90!!!   Ain’t dat da way it is!!!!

So, you will have to visit my

web site to check out the action.  We are going to be adding a lot to it in the next weeks.  It’s a fun place if you just like to ‘trip’ and ‘surf’.

I did take a professional float trip near the end of the week, with Jimmy the Fishing Guide.  He was great, and we will have loads of pics on my site.  And, you know pics are worth lots of words.

For a ‘heads up’, I am recording a new record dedicated to the soldiers who are fighting in Iraq and Afghanistan, and I’m back in business in Nashville with new offices and a new partner.  Actually, he is an ‘old partner’.  He’s my first music producer and discovered me on the streets of Nashville in 1986, and in 1987 my first radio hit "Goodbye to West Virginia" was playing on nearly every radio station in Nashville, and around the world.  It still is.

So go to this site and check it out:

Dove season starts out here on the 1st of September, and I take 18 of my best show chickens to the California State Fair on my 62nd birthday to compete with the best birds in the State, so I have a lot on my plate, so stay tuned for more of my stories.

So, stay low, but keep movin’!