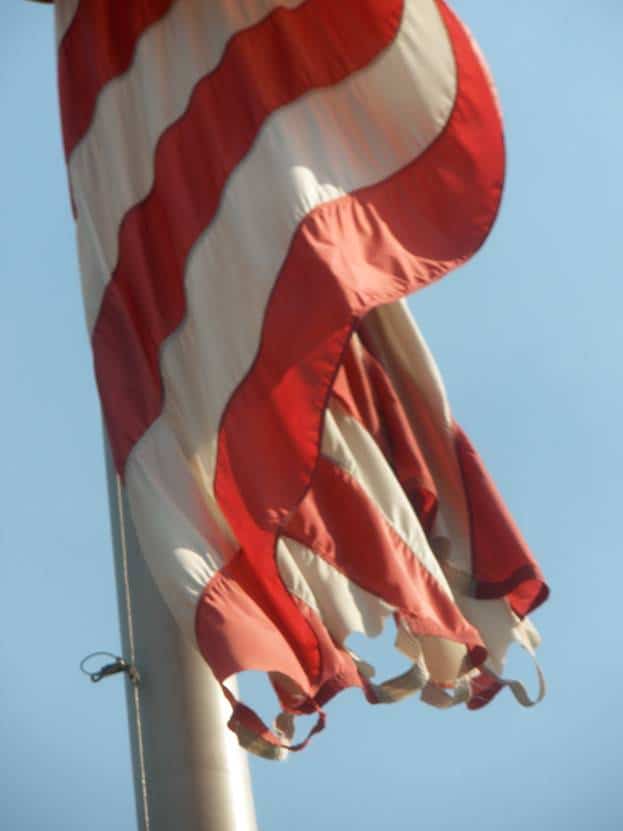 TATTERED FLAG ON A RUSTED STAFF

ANOTHER SLAP IN THE FACE FROM LA VETERANS OFFICIALS

Just when you thought the Los Angeles VA bureaucrats couldn’t stoop any lower, or be any more disrespectful and insulting toward America’s Veterans, they ceremoniously pushed their sleaziness to a new low by disgracefully flying soiled, torn and tattered American Flags at half-staff in memory of Senator Ted Kennedy.

Beyond Disgraceful
At both the north and south entryways into the largest VA in the nation on one of busiest boulevards in the nation and visible from one of the busiest freeways in the world, there are four towering flagpoles with shabby and disgraced American Flags hanging, which clearly displays the full disrespect and contempt the Department of Veterans Affairs (DVA) has for those who have defended our U.S. Flag.

Beneath one of the disgraced American Flag is the POW / MIA Flag that is also torn and tattered. Another in the middle of a nearby parking lot has a terribly rusted flagpole with both the U.S. and POW Flags soiled, tattered and torn. 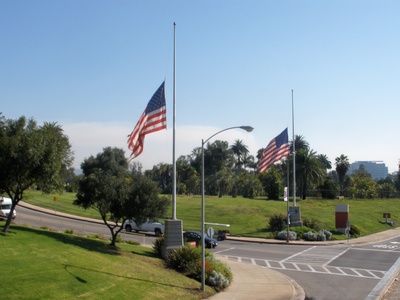 A flagpole in front of the Wadsworth Hospital where patient Veterans are rehabilitating and convalescing, there are flagpoles with another soiled and tattered American Flag alongside the California State Flag that is badly faded, dirty, and ripped in shreds.

To call all of this disgraceful would be a compliment.

Violation of the U.S. Flag Code
McDonald’s and other business establishments showed far more respect toward Senator Kennedy’s passing with their fresh, clean and un-tattered Flags flying at half-staff.

The VA’s disrespectful and shameless display of “Old Glory” seriously violates the U.S. Flag Code, Section 176, “Respect For Flag,” (k); “The flag, when it is in such condition that it is no longer a fitting emblem for display, should be destroyed in a dignified way, preferably by burning.”

For the VA not to have replaced these desecrated Flags earlier is unpatriotic, unprofessional and unforgivable.  But for the Los Angeles VA bureaucrats to have failed to replace these desecrated Flags when ordering them lowered at half-staff to honor a U.S. Senator, only underscores the serious incompetence and full disregard of duty entrusted to them, and the complete neglect and disregard to our Veterans who faithfully protected the American Flag during their watch. 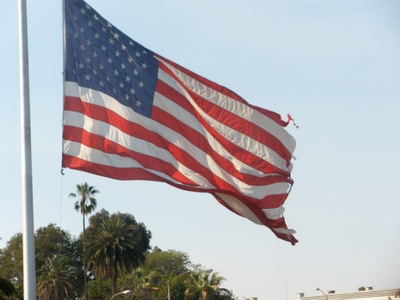 Equal Treatment of Disrespect
Regardless of one’s political opinion of Senator Kennedy, these disgraced American Flags flying at half-staff in his honor are symbolic of the total disrespect toward all of America’s Veterans who pledged their lives to defend it.

If a military Veteran and senior member of the U.S. Senate, a brother of the 38th U.S. President, and the patriarch of one of the wealthiest families in the nation gets this kind of deplorable treatment from the DVA, why should anyone be surprised when the every day Veteran is treated with scorn, contempt, disrespect and abuse?

With soiled, torn and tattered U.S. Flags hanging from rusted flag poles throughout the busiest VA in the nation, why would it surprise anyone that the medical employees at several VA’s nationwide didn’t clean their colonoscopy equipment before infecting thousands of America’s Veterans?

This is Gratitude?
Upon learning of Senator Kennedy’s death and saying that he was “heartbroken,” President Obama declared: “An important chapter in our history has come to an end. Our country has lost a great leader, who picked up the torch of his fallen brothers and became the greatest United States Senator of our time.”

So why is he allowing the DVA to fly disgraced American flags at half-staff to honor the very man whose endorsement 19 months ago solidified his candidacy nomination of the Democratic Party and his eventual election as President of the United States?  What kind of gratitude is this? 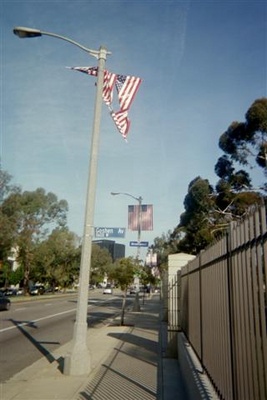 Where’s Congressman Waxman
Why hasn’t Congressman Henry Waxman, whose 30th District makes him the entrusted steward of the largest VA in the nation, spoken out against the unforgivable display of American Flags flying at half-staff on Veterans property?

The Congressman is home vacationing in Los Angeles while on Congressional break, yet why hasn’t he spoken out about this shameful disrespect toward his long-term political colleague? Well, a prerequisite to notice the disgraced Flags flying at half-staff would mean he’d have to at least drive by the VA.

Since he only visits this century-old National Veterans Home to discuss leasing or giving away Veterans property to favored businesses and special interest groups, he wouldn’t notice nor would he censure his VA cronies for such despicable conduct.

Time For Regime Change
President Obama has promised on various occasions: “We have a sacred trust with those who wear the uniform of the United States of America.”  But why isn’t his promise being honored at the largest VA in the nation that has more than one million Veterans living within 50 miles?

The Los Angeles VA bureaucrats continue to show no respect toward America’s Veterans and their service to our country, to their healthcare and well being, or to their sacred property where they are supposed to be healing from the rigors of war while defending our nation.

To display a torn and tattered American Flag on Veterans hallowed grounds at any time would exceed even the lowest forms of disrespect, but to do it in supposed honor of one of the longest-serving members of the U.S. Senate and a close friend of the President, only underscores why there needs to be immediate regime change at the Los Angeles VA.

If President Obama and DVA Secretary Eric Shinseki aren’t extremely embarrassed about this latest fiasco of VA bureaucratic buffoonery, then what kind of disaster will it take to get them to terminate the following trough-eating government sycophants and replace them with competent and dedicated public service employees who truly care about America’s Veterans and the Flag they defend:

If Secretary Shinseki will not immediately terminate these incompetent and toxic bureaucrats, then he needs to resign so that President Obama can appoint a new Secretary of the DVA who will have the courage to end this ongoing national embarrassment against America’s Veterans and the American Flag.

About the Author: Rosebrock is a U.S. Army Veteran, Vietnam War-era, HQ USARHAW, Schofield Barracks. He is Director of The Veterans Revolution and Co-Director of We the Veterans, and a Member of the American Legion Press Association. [email protected]