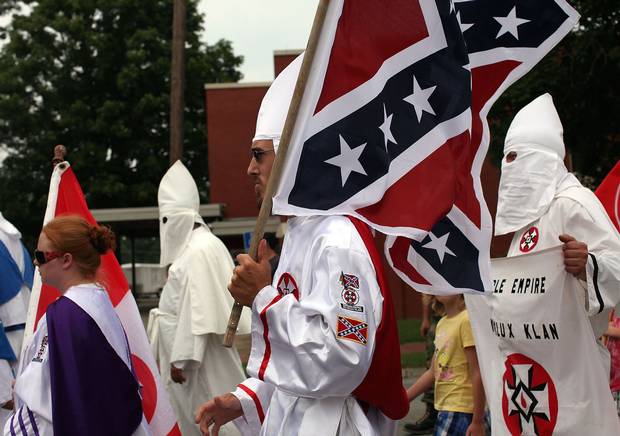 DISCLOSURE: This article deals with racism and bigotry. While, VT does NOT support racism, bigotry, violence, or hate speech, we are an open source uncensored journal and support the right of independent writers and commentors to express their voices. Reader discretion is advised.

The “teabaggers” and “resist.net” are holding a conservative rally in Washington, with many calling for the assassination of the President.  There is no shortage of money to pay for the outing as major corporations, listed below, including insurance and defense contractors, are funding this rally, really a Klan rally.

The issues?  Well, there really are none, none but one.  We are currently beset with problems, entirely caused by the Bush administration whose illegal wiretapping, spying, secret prisons, torture, and undermining of law was a threat to every American.  It could be our massive debt, run up by Bush or the wars we are losing, started by Bush, or the unraveling of Bush’s 9/11 coverup.

It is none of those.  It is just like it was during the 1920s.  Ignorant “white folks” scared to death of “black folks” are out on a lynching party backed by corporate money.  First, let’s get to the list of corporations paying the bills.  It was easy to find.  The “movement” has websites run by big-money public relations agencies.  Their client lists are public.  So, here goes, this is the money behind the new KKK: (note that many of these “companies” themselves are “fronts”)

Did you notice the pile of insurance companies, defense contractors, the US Chamber of Commerce, and the NRA? Check the list carefully.  Look into who these folks are.  This is the group funding, what they hope will be, a civil war in America.

These are the folks sending out gun-toting protestors talking about “watering the tree of liberty.”

These are also the richest people in America and the most powerful and include some of the biggest polluters, the biggest protectors of illegal immigration, and thousands and thousands of lawyers working for big business against everyday Americans.

This is the single biggest group of “Washington insiders” ever assembled, if not insurance industry or defense, all are directly aligned to the Republican Party and helped formulate failed Bush policies.

Let’s face the truth.  There is only one reason all those uneducated white people are out yelling and screaming, guns left in their luggage on buses paid for by taxpayer money sucked in by the biggest pack of corporate thieves that ever bribed a congressman.

It’s all about the “N” word.  We are having a convention of Americans in love with the “N” word, people who use it every day, folks afraid of black people they don’t know, and people easy to scare.

We are also having a convention of “male enhancement” customers and people whose antipsychotic drugs don’t seem to be working as intended.

If you work for one of the companies listed above and you don’t agree with using money, some taxpayer bucks, and much of it funds meant for heavily abused stockholders to spend on Klan rallies, maybe you should start asking some hard questions.

If you are someone who believes they are a patriot but isn’t entirely comfortable with the idea of fighting for a “patriotic resistance” funding by think tanks working for defense contractors and insurance companies, consider yourself duped.

However, if you are a racist, a secessionist, and hate the United States, its laws, its government, and especially its freedoms and traditions, you are exactly where you belong.

Not all news is bad and not all corporations are involved in cheating the public or promoting racism.  Below is a list of companies that have refused to take part in the “9/12 Revolution.

Support these companies with your business and your loyalty as they support you.