Home Veterans A Fake Warrior and the "Wall That Heals" 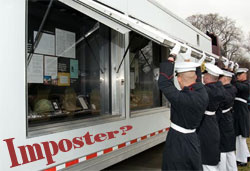 James Richard Lyons is a hero. He joined the Navy in 1964 at age 17. James went through some of the military’ most rigorous training schools, including;

James served 4 tours in Vietnam and attained the rank of GySgt. He received a Silver Star and a Purple Heart. That is a lot for a four year enlistment.

But there is a problem, A BIG PROBLEM!!!

James Richard Lyons now drives the rig that hauls the Wall That Heals around the country. The Wall That Heals is owned and operated by the Vietnam Veterans Memorial Fund (VVMF). The VVMF hired Richard last year to do the driving because the former drivers retired.

The VVMF should have done a better job at selecting a driver. It seems Richard may not be all that he claims to be. His page on what was classmates.com says he graduated high school in 66. see

Yet he claims to have enlisted in 64. 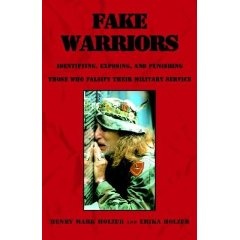 There  is no need for me to go over any more of the claims of Richard Lyons or the counter claims of the POWNETWORK and others. You can see them for yourself at the sites above.

What we need now is to request, NO DEMAND, that the VVMF investigate the military history of its employee and if it verifies that Mr. Lyons is a fraud, Remove him from his position. In addition the VVMF should assist the Federal Athorities in prosecuting Lyons under the Stolen Valor Act if it finds he is representing himself as something he is not.

It has been stated that only one in five men who claim to be Vietnam Veterans actually served in Vietnam. The prosecution of those who are now claiming to be something they are not must be relentless and to the fullest extent of the law. I cannot imagine why someone would want to claim to have gont through what we did in country and when we came home. Then again, it was wanna-bes who made things bad for us at home!