Osama bin Laden died during or immediately after the Tora Bora attack in December 2001.  The cause is believed to have been wounds complicated by advanced kidney disease.  This fact is universally accepted in Afghanistan, Pakistan and elsewhere in the Islamic world.

It has now reached the point in Pakistan that whenever an Osama bin Laden tape is on television, people roll around the floor laughing themselves to death.  This has been verified through the highest levels of Pakistan’s military and intelligence services who have confirmed that, not only has Bin Laden been dead for years but the United States has known and accepted this fact, a fact well known to our political, intelligence and military leaders, since well before the invasion of Iraq and confirmed by sources active in FBI counter-terrorism at that time.

Why would President Bush, then sporting a 95% approval rating, have traded a huge American win to justify another war in Iraq, a war now proven unneeded?  How much was gained by keeping a focus on bin Laden, who had denied any involvement in 9/11, when no other real enemy existed?  Think Patriot Acts, rendition, wire tapping, oil and defense profiteering, convenient election time bin Laden threats and much more. 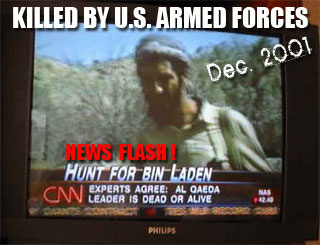 Brilliant and highly successful military operations by American soldiers fighting in Afghanistan, soldiers who have felt the sting of humilitation and failure for years, brought about the "escape" of bin Laden, never received deserved honors and thanks.  Instead, our troops were blamed for ineptness, incompetence and worse for reasons that were entirely political.

It was more important for the administration to have a "boogeyman" to bring out to "frighten the children" than to thank our troops or even claim a real success which would have bolstered the popularity of President Bush and relieved the fears of millions of Americans.

When Bush’s popularity plummeted, eventually nearing and below 20%, and the continual threats of terror war had grown tiresome, bin Laden, dead to the Islamic world for years, could not be miraculously resurrected to die again on cue.  After the phony intelligence fiasco of the Iraq war, the credibility for such theatre no longer existed. Thus, thousands of Americans continue to hunt a denizen of the spirt world, some giving their lives in this meaningless endeavor.

Questioning those of the Islamic world who knew Osama bin Laden as a leader in the fight to expell Russia from Afghanistan and the millions who admired his courage, some things quickly become apparent.

If everyone who would potentially support Osama bin Laden believes he is dead, what does this tell us?  This part is fact.  Thus, he has no subordinants, no followers, no networks, nothing.  American policy is entirely based on lying to the American people, not that bin Laden is alive but that Islam believes him to be alive and that millions are following him.

Nobody is following bin Laden, anyone claiming this would be locked in a lunatic asylum.  It would be prettymuch the same as saying you are Napoleon or believe in the Easter Bunny.

It isn’t necessary for anyone to prove 9/11 was an inside job or that we invented Al Qaeda to pass crazy laws at home and send our military on a worldwide quest for oil.  All we know is that one lie, a massive lie, can be proven.  America has been lied to about something so important that it would have changed world histroy and saved thousands of lives.

We know why the lie was told.  We know the Pentagon, the CIA and our press had to be involved.  We know the lie is still being told, a lie that has made America the laughing stock of the world.  After bin Laden’s death, America became a different country.

Congratulations, belatedly, President Bush.  The mission was accomplished, long before you even claimed it was.  The terrorists in Afghanistan were destroyed, their leader was killed and it was all over.  We had won.

We could have claimed victory and stopped that day.  America would have been safer, richer and better for it.  Every disaster since then was based on one lie.  Even a child could piece it all together.

(An interesting additional read on this subject related to a book by Professor David Griffin can be viewed at this British site: http://www.dailymail.co.uk/news/article-1212851/Has-Osama-Bin-Laden-dead-seven-years–U-S-Britain-covering-continue-war-terror.html)