Home Veterans AMERICA'S RELATIONSHIP WITH ISRAEL: NOT SO "SPECIAL"

At What Cost the Israel Lobby?

More than 46 years ago, President John F. Kennedy sought to preclude a nuclear arms race in the Middle East. In June 1963, he wrote the last in a series of insistent letters to Israeli Prime Minister David Ben-Gurion. Those letters sought what Israel now demands of Iran: international inspections of its nuclear facilities.

The key difference: Kennedy knew for certain that Israel, while portraying itself a friend and ally, had repeatedly lied to him about its nuclear weapons development at the Dimona reactor in the Negev Desert.

Best estimates point to sometime between 1962 and 1964 when Israel produced its first weapon in what is now a nuclear arsenal estimated at 200-400 warheads, including multiple means of delivery.

Kennedy’s letter to Ben-Gurion was anything but friendly. The words chosen came not from diplomacy but from the instructions that a judge gives a jury on criminal culpability. In that brusque letter, the U.S. commander-in-chief insisted that this purported ally prove "beyond a reasonable doubt" that the Zionist enclave was not developing nuclear weapons.

One day after that June 15th letter was cabled to Tel Aviv for delivery by the U.S. ambassador, Ben-Gurion abruptly resigned citing undisclosed personal reasons. As his resignation was announced before the letter could be physically delivered, Jewish authors routinely claim that Kennedy’s message failed to reach Ben-Gurion. Nonsense.

Deprived of an Israeli government with which to negotiate, Kennedy was denied a national security victory that may well have spared the world a problem he foresaw almost a half-century ago. In retrospect, that Israeli conduct raises topical questions about the ability of the U.S.-or any nation-to hold Zionist extremists accountable.

The Khazars vs. the Kennedys

During this same 1962-63 period, Senator William J. Fulbright of Arkansas, chairman of the Committee on Foreign Relations, convened hearings on the legal status of the American Zionist Council. The AZC received funds from the Jewish Agency, a predecessor to the state of Israel. As a recipient of U.S. taxpayer funds, the Jewish Agency used those funds to lobby for more funds. Under U.S. law, that conduct required that the AZC register as a foreign agent.

Attorney General Robert Kennedy joined Fulbright in that quest. Their effort was thwarted by the Israel lobby and then by the murder of President Kennedy. Thereafter, concerns about the impact of Zionist influence on U.S. policy making continued to grow. By 1973, Fulbright could announce with confidence: "Israel controls the U.S. Senate." In 1974, he lost his Senate seat. [See: "How the Israel Lobby Took Control of U.S. Foreign Policy."]

Fast-forward to today and imagine the Middle East without an enclave of nuclear-armed Jewish nationalists. The threat that Kennedy posed to Tel Aviv’s arsenal was eliminated five months after Ben-Gurion’s strategically well-timed resignation. When Vice President Lyndon Johnson was sworn in as his successor, LBJ quickly increased the arms budget for Israel. Imagine today’s Zionist influence on U.S. policy had Fulbright and the Kennedys succeeded in requiring that the lobby register as what it is: a foreign agent.

The Kennedy/Fulbright risk to Zionist influence reemerged five years later when Robert Kennedy announced his candidacy for the presidency during the height of an unpopular war. That war was vastly expanded under the leadership of the Texan who replaced his brother as president. Another Kennedy presidency posed for Tel Aviv a two-fold threat.

First, Robert Kennedy’s peace candidacy revived the possibility that he would pursue his brother’s agenda and target for elimination Israel’s nuclear arsenal in order to preclude a nuclear arms race in the Middle East. Second, with Senator Fulbright still wielding influence on U.S. foreign policy, another Kennedy administration revived concerns about restrictions on the Israel lobby.

When this charismatic contender surged in the political polls, that threat was eliminated June 5, 1968 at a campaign event in Los Angeles. His murder at the hand of Sirhan Sirhan, a Palestinian émigré, coincided with the first anniversary of the Six-Day War. The assassin later cited as his motive Kennedy’s campaign pledge to provide more fighter jets to Israel.

With that murder, the road to the presidency was cleared for Richard Nixon. When lobbied by Israeli Prime Minister Golda Meir, Nixon readily agreed to endorse an "ambiguous" status for Israel’s nuclear arsenal, akin to "Don’t Ask, Don’t Tell."

Special Standard for a Special Friend

Due to its "special relationship" with the U.S., Tel Aviv remains a non-signatory to the Nuclear Non-Proliferation Treaty. Its Dimona facility has never been subjected to the inspections it now seeks for Iran. But for photographs taken inside the Dimona facility in 1986 by nuclear technician Mordecai Vanunu, that "ambiguity" might well remain intact.

The International Atomic Energy Agency (IAEA) has repeatedly certified that Iran is not enriching uranium beyond the 3.5% required for nuclear energy. Tehran has agreed to send its uranium abroad for the further enrichment required for medicine (19.5%), a level still well below the 90% required for nuclear weapons. It remains to be seen whether such an arrangement can proceed consistent with Iranian sovereignty.

In mid-September, the U.S. intelligence agencies reported to the White House that their assessment since the National Intelligence Estimate of November 2007 remains unchanged. They still do not believe that Iran has resumed nuclear weapons development work. A November 5th report by the IAEA found "nothing to be worried about" in Iran’s newly disclosed uranium enrichment site.

What about Israel and the nuclear threat that Jewish nationalists pose to the region? What has their lobby been doing? Answer: lobbying. As during the Kennedy era, Tel Aviv remains focused on a single goal: ensuring that its ally and patron continues a six-decade policy ensuring that Israel is not held accountable-for anything.

At what cost has the U.S. acted as if the Israel lobby is not a foreign agent? The strategic issue faced by Fulbright and the Kennedys remains unresolved: how best can the U.S. eliminate Israeli influence as a threat to U.S. national security?

Since that fateful letter of June 1963, what has been the cost of this lobby to U.S. interests? But for this entangled alliance, what would be the relationship of the U.S. to other nations in the region? What costs have been imposed on other nations by this special relationship? At what point will Americans say: Enough?

VT Editor, Jeff Gates is author of Guilt By Association, Democracy at Risk and The Ownership Solution and a US Army Vietnam Veteran.  See 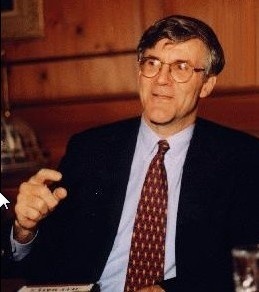