Home Veterans GORDON DUFF: GENERAL MCCHRYSTAL, WHOSE SIDE ARE YOU ON?

MCCHRYSTAL SENDS OTHERS OFF TO WAR

You could ask, how do you get to be a General if you haven’t had one second of combat in an entire career spanning decades?  Was being born the son of a General a help?  Did kissing up to Dick Cheney help?  Did a lifetime of telling people what they wanted to hear, no matter how stupid or what the cost, help?  Do we want to turn the lives of our children over to this man, someone who is 90% politician and 10% soldier? 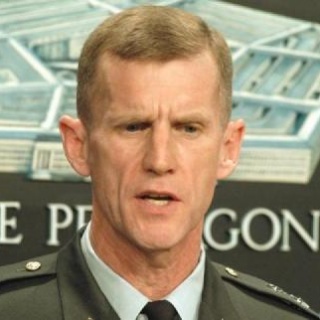 Where does McChrystal get his information?  Does he get it from Karzai, defacto president of ten square miles of Afghanistan?  Who is McChrystal planning on defeating?

With dozens of tribes fighting each other and a dozen or more different groups calling themselves the “Taliban,” many totally unaware of each other, I hope he is aware that the only uniting factor in all of this is a desire to throw America out, not in support of any cause America is fighting against, but because we are so utterly stupid that we have allied ourselves with idiots that absolutely everyone hates.

These are the facts, the real facts, not the “lets see if we can keep this war going forever” facts”

We could spent hours, pages, days discussing history, demarcation lines or a political system that is nothing like either our military or our news media says it is.  Does anyone suspect our news is written by advertising people working for companies that make bullets or maybe coffins?

What we are hiding from ourselves is that the initial invasion of Afghanistan put a bizarre and corrupt government in power that aligned millions of people against us.  This fact was hidden from us until we got into so much trouble we couldn’t hide it anymore.

Our military geniuses, the ones who lied to us for so many years, are now asking for a surge so they can disengage.  Does this mean they want to put up a bit of a show, kill off a few people and run like hell for the door screaming “I win, I win?”

Right now, it looks like Obama is going to go along with this.  Bush already screwed things up so badly that nothing can be done.  When in doubt, blow up some buildings and lie like hell, then run home to mama.

The British did it.  The Russians did it.  Now we can do it.