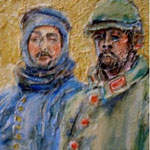 AWAITING A CHRISTMAS FORGOTTEN BEFORE IT CAME

In 1914, during the first bleak Christmas in the trenches of Europe, Christmas came and war stopped. Informal truces were declared, war stopped and men who had been killing each other crossed No Man’s Land, and approached their bitter enemy in a spirit of brotherhood. The first brutal world conflict nearly ended that day.

It took threats of court martial and execution to get the carnage on track. Humanity had reared its ugly head, threatening to bring down the entire filthy system of debauchery and exploitation that has kept humanity in bestial slavery well past what should have been our awakening as a sentient species.

Nearly a hundred years ago, it was more than the holiday traditions, the shared tunes sung in different languages, the common religious symbols and imagery that challenged a war. It was the discovery of, not only a common humanity but the shared experience of all warriors, all “modern” warriors.

Since the industrial revolution, war has become a periodic cleansing, or, more rather, a flushing of our national sewage in reverse.Modern society has risen excrement to human form, crowned it with authority, power, wealth and honor.

That which a healthy society would sweep away, the foul stench, the waste, the disease, now pulls the chain. This is even beyond Darwin. It isn’t the primordial ooze that has risen to the top of the food chain, the proverbial cockroach, but rather something less, much less.

In 1914, the world, the world of “the west” was a small one. You could travel from London to Paris to Berlin to Vienna in a little over a day. The civilized world existed there, or so we imagined, a world that, by 1919 will have come to an end.

The Treaty of Versailles, one of many such gatherings, realigned the world, shoving hundreds of millions of people under the control of bizarre and senseless political systems whose shadowy regimes were little but puppets of an economic system that had developed as a form of life, seemingly beyond human but devoid of humanity, empty of feeling, filled only with intent, intent to power, intent to control, intent to destroy.

To serve that intent there arose a species devoid of humanity, devoid of feeling, of even intellect, a species living off rot and stench, a parasitic species.

All conflicts are simply failures of heart. Without heart, only fear is left.

Here in the west, we enter our Christmas, a time of year generally defined by feelings of love, hope, family and nostalgia for what we have lost. What have we lost? Are all of our losses, the ones we feel in our hearts, the same, much as that day, back in 1914 when the trenches emptied in brotherhood and song?

How can a world filled with people who hope so much, are willing to sacrifice everything, even their lives, sometimes for people they have never met, be filled with wars that go on year after year, wars that serve no purpose but to crush hope.

For every “combatant” killed, 5 innocents die.

This isn’t just Afghanistan or Iraq or Gaza. It is all war. Every death is a loss of hope, a dream snuffed out, not for any human purpose, no, not human. Is any war worth the death of a single child?

Aren’t we all children?

Don’t we all deserve for ourselves what we wish for our own children? Why would any of us hurt a child? Is there really so much pure unadulterated evil in the world that so many children must die to make us safe?

If this is true, why then is it that those who define evil are the walking, talking embodiments of excrement and their minions, the cockroaches doing their bidding? There are always reasons to murder children. Give someone a uniform, a weapon and a mission and dead children can be stacked like cordwood in the name of something, order, democracy or “national security.”

This 1914, the one nearly a century later, enemies aren’t going to come out of the trenches and sing about baby Jesus, drink brandy and decorate Christmas trees.

In Afghanistan, we send our children to teach the love and goodness of Christian society, a love and goodness felt in hearts behind endless layers of kevlar, hearts kept warm and safe under the watchful eye of Predator drones standing ready to dispense mayhem and destruction, wielded as though it were a child’s toy, a Playstation or Gameboy.

What have we learned in that hundred years? 90 years ago at Versailles we told ourselves we had been ordained by god to rule because we had invented airplanes and machineguns. 90 years later, the world created by the our arrogance then is proving beyond our capacity to control today with our weapons that would have seemed unimaginable to those children who chose to stop a war back in 1914.

Has the human heart changed?Do we hate life? Do we no longer feel? Is death nothing? Is hope useless? Can we define evil as the willingness to do any wrong in the name of good?