WASHINGTON, DC — Officials in the Obama White House are considering the possibility that the Christmas day attempt by Nigerian terrorist Umar Farouk Mutallab to blow up an airliner about to land in Detroit was deliberately and intentionally facilitated by unnamed networks inside the US intelligence community. This was the gist of a report by Richard Wolf delivered in this evening’s edition of cable network MSNBC’s Countdown program, hosted by Keith Olbermann. This report comes on the eve of a special White House inter-agency conference convoked by Obama to deal with the massive systemic failure of US intelligence in allowing the Yemen alumnus Mutallab to board the Amsterdam to Detroit flight while allegedly carrying a PETN explosive device on his person.

Wolf attributed his account to top officials in the Obama White House. The intentional sabotage of US antiterrorist screening procedures would explain why Mutallab had been able to use his US visa, escape interrogation and special searches, and board his flight, even though he was festooned with every red flag in the annals of airport security. If Wolf’s report is accurate, these Obama officials may be pulling on a thread which could begin to unravel the entire secret structure of illegitimate power which has afflicted this country — in this case, the apparatus which manufactures terrorist incidents for political purposes of mass manipulation, dictatorship, and war.

Wolf offered two possible explanations cited by his White House sources for the intentional sabotage of security procedures, resulting in yet another egregious failure to connect the dots. The first was a “turf war” inside the intelligence community, with one agency seeking to hoard information and deny it to others. The second was the desire to “embarrass” some leading figures, presumably referring to partisan animus or other resentments against Obama and his top appointees. 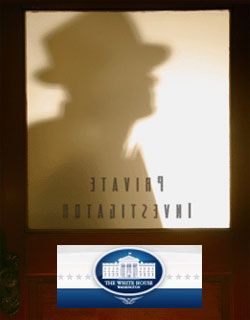 ANSWER: RE-LAUNCHING THE “GLOBAL WAR ON TERROR” VIA YEMEN

But Obama and his advisers should be urged to consider a third explanation far more plausible than either of these. This third explanation would include the desire of a rogue network inside the US government to unleash a new wave of Islamophobic hysteria to rehabilitate the discredited “global war on terror” strategy in a new and more sophisticated form, while imposing a new round of outrageous and degrading search procedures at airports (such as the full body scanners peddled by the venal Michael Chertoff) to soften up the American people for heightened totalitarian control and political repression. All of this, moreover, in ways that will be politically harmful to Obama.

The foreign policy rationale of Mutallab’s spectacular near miss in the skies over at Detroit would include the current US campaign of ginning up the three-cornered Yemen civil war so as to threaten and weaken both Saudi Arabia and Iran, each of whom is backing a faction in that civil war. Another benefit is to enhance the US presence in Yemen , a country which controls the exit from the Red Sea and thus all traffic coming out of the Suez Canal , one of the great naval chokepoints of the world and vital for the commerce of China , a leading US rival.

Yet another advantage would be to suppress criticism of Obama’s West Point expansion of the existing war in Afghanistan to include an all-out assault on the territorial integrity and statehood of Pakistan . As a result of Mutallab’s handiwork, Obama has now declared a new Axis of Evil composed of Afghanistan-Pakistan , Somalia , and Yemen . Yemen in particular has been catapulted to the center of international attention by an Anglo-American propaganda blitzkrieg of monumental proportions.

Gold is where you find it, and you often find it in strange locations, as in this case. If Wolf’s report is correct, these unnamed officials in the Obama White House might well be on the trail of the rogue network or secret government which has deliberately and cynically manufactured the majority of the large-scale terrorism incidents of recent decades. This rogue network is older than Obama, older than Bush and Cheney, older than Clinton .

It goes back many decades, and its calling cards have included such catastrophes as the Kennedy assassination, the Gulf of Tonkin incident, the Iran-Contra affair, and 9/11. The rogue network and the bankers who control it obviously regard Obama as an expendable puppet destined, like Jimmy Carter 30 years ago, to go down in the shipwreck of his administration’s Wall Street-inspired policies.

As of this evening, it cannot be excluded that the Obama forces might fire some of the leading moles who made the Mutallab incident possible. If they do, that purge will be an important step in the right direction. In the meantime, three unauthorized entries into the White House over the last several months have doubtless served as a deterrent reminder to Obama that the rogue network can get to him at any time.

According to Wolf’s report, the Obama White House officials are approaching the rogue network from the side of its mole component. The moles are subversive government officials who disdain the Constitution and instead serve a private network ultimately centered in Wall Street. One basic task of the moles is to make sure that patsies like Mutallab are not interfered with, no matter how suspicious their behavior, and no matter how many times they violate the law.

If Mutallab’s kamikaze mission had produced an explosion, these same moles would have been the first to leak the news that the bomber was a jihadi from Nigeria . The moles would then have sabotaged any investigation, which is what they are doing tonight as this is written.

Mutallab had been denied a visa to enter the United Kingdom , despite the fact that his family owned a luxury apartment in London ‘s West End . His name had been placed on the UK watch list. Mutallab’s father, a prominent Nigerian banker, personally denounced him to the CIA and the State Department as a possible extremist who was then in Yemen , most probably at a training camp. Nevertheless, Mutallab’s visa was not revoked. Mutallab had met the infamous Anwar Awlaki, who had just received a wave of publicity for his relations with Major Hasan the Fort Hood patsy.

Chatter from the Yemen patsy milieu monitored by the US contained references to “the Nigerian”  meaning Mutallab. Mutallab paid cash for his ticket in Ghana , checked no luggage, and entered Nigeria illegally, but was nevertheless permitted to embark on the first leg of his mission. In London , Mutallab was assisted by a “well-dressed Indian,” who told the gate agent that Mutallab was a Sudanese who did not have a passport. Nevertheless, Mutallab was allowed to board. As the present writer stated in a Dec. 28 interview on Russia Today, Only the active complicity of treasonous moles can explain Mutallab’s miraculous immunity to all surveillance and screening despite all these factors of suspicion.

LONDONISTAN: THE SCHOOL FOR PATSIES

But the moles are not the only component in the murderous apparatus of false flag terrorism of the type put on display over Detroit on Christmas Day. Patsies like Mutallab must be recruited from the ranks of misfits, psychotics, fanatics, dupes, criminals, and the mentally impaired. They must be equipped with an appropriate synthetic ideology of the type which Mutallab evidently acquired during his years in that immense school for patsies which is the MI-6’s artificially cultivated milieu of the Londonistan jihadis, the trendy Islamist radicals of the British capital.

Patsies like Mutallab must then be carefully sheep-dipped to establish a connection with “Al Qaeda,” in reality the CIA Moslem Legion. Mutallab underwent the requisite sheep-dip through his contacts with the incendiary firebrand Anwar Awlaki, now thoroughly exposed as a double agent and patsy recruiter/patsy chaperone working for the United States and well deserving of the epithet Awlaki the CIA Lackey. Awlaki had been implicated in the cases of supposed 9/11 Pentagon suicide pilot Hani Hanjour, and then of Major Hasan of Fort Hood , among others.

The paradigm of false flag “Islamist terrorism” deployed once again on Christmas Day by this rogue network which cuts across the top echelons of the executive departments and agencies of the US government is now frayed, worn, and threadbare. It is rent with gaping holes. The inherent disadvantage of false flag terrorism as a strategy of mass manipulation lies in the diminishing returns which this method is capable of producing: the more it is repeated, the more people begin to suspect that it is a fraud and sham.

The flying patsy routine has been repeated ad nauseam, from the retarded Richard Reid the Shoe Bomber of December 2001 to Mutallab the Knicker-Bomber of December 2009. Over the past ten days, the genuine exasperation of columnists and editorial writers over this latest blatant failure to connect the most elementary of dots has suggested that all the naïve cover stories are about to collapse in a shock of recognition that networks infesting the US government do indeed actively create and produce terrorist events for their own evil purposes. We need mole detectors at the NSC, CIA, State Department, and Pentagon  not more harassment of the traveling public.

Persons of good will should mobilize to expose the Detroit patsy operation as a crude and blatant false flag event designed to promote foreign wars and domestic repression. Call the White House. Call your Congressman. Write a letter to the editor. You never know who might catch on.