Military Times, the parent publication of Air Force Times, reports that the Air Force has been consistently cracking down on Airmen seeking exemption and waivers to get out of deployments in Iraq or Afghanistan.

As noted in the article, Air Force Expeditionary Force (AEF) units can deploy from a low of 90 days to high of six month tours, and most Airman face only one tour compared to the grueling Army and Marine ground troops six months to a year or more on multiple tours.

I believe that the Air Force is now doing a much better job at preparing Airmen to be boots on the ground. Check out the Air Force Expeditionary Force Center photo gallery of Airmen being given what looks like Basic Infantry Training. http://www.expeditionarycenter.af.mil/photos/mediagallery.asp?page=1

Policy change means most Airmen will deploy to Iraq and Afghanistan.

If needed, nearly all Airmen could go to war 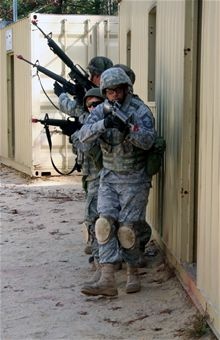 During December 2008, Air Force Chief of Staff Gen. Norton Schwartz huddled with his war planners to figure out how to get more medical evacuation helicopters to Afghanistan. Schwartz offered up the aircraft used to teach pilots to fly the HH-60G Pave Hawk, the Air Force combat search-and-rescue helicopter.

In the past, the Weapons School instructors at Nellis Air Force Base, NV were exempt from deployment to Iraq or Afghanistan because Air Force leadership considered their educational mission too vital.

A new policy emerged that wintry day, one that put Air Force war fighting before training.

"We got very direct guidance from the chief," recalled USAF Maj. Gen. Marke Gibson, director of operations for the deputy chief of staff for operations. "The chief said, ‘We’re not going to have Americans over there dying while we’re worried about a weapons instructor course.’ "

Although most air expeditionary force deployment changes aren’t as dramatic as the one Schwartz lay forth, the Air Force has steadily tightened deployment exemptions – from yanking medical waivers to cutting training assignments.

About a year ago the Air Force began to closely monitor Airmen who were seeking ways out of deployment to Iraq and Afghanistan. Military Times noted that if an Airman had not deployed because they wrenched your back or had a baby, the Air Force was watching them closely.

The scrutiny is the response to findings by the Air Force Audit Agency that the USAF failed to track its medical waivers from late 2001, when deployments ramped up after the 9/11 terrorist attacks, through 2006. Only in 2009 has there been a strict accounting policy in place Air Force-wide.

Today all Airmen who have medical waivers face a monthly review by their base commanders and doctors, and a possible change in their deployment status, according to Lt. Col. Brian Pinkston, a flight surgeon and chief of operational medicine for the Air Force Medical Support Agency.

"If someone has a broken arm that should have healed in six weeks and it’s now six months, they pull the records and say, ‘Does this make sense?’ Col. Pinkston said. Because of the new scrutiny, the number of Airmen with permanent non-deployable conditions is a fraction of what it was nine years ago.

Many of the airmen with permanent conditions have left the service or have been reclassified as deployable if they can be sent to an overseas base that has a hospital or clinic. This year, about 9,680 airmen, or 3.4%, are in the new category of having a condition that requires medical care but doesn’t prevent them from deploying.

Another 3.89% of Airmen, almost 11,415, have waivers for temporary conditions, requiring them to be eligible for deployment within a year of the diagnosis. The number of temporary waivers had hovered around 2 percent until the crackdown.

About a quarter of all waivers are issued for muscle and skeletal conditions, such as back problems, arthritis, broken bones and torn ligaments, according to the Surgeon General’s Office. Pregnancy was the second most common cause, at 14.4%.

Fakers in the Ranks?

Before the crackdown, which was implemented base by base throughout 2007 and 2008, the Air Force did not regularly review the medical waivers it issued; an Airman could go for more than a year without his deployment status being updated.

After the 9/11 attacks, the frequency and number of deployments skyrocketed, and so did the tales of imaginary illnesses and conditions. Concerned there were fakers in his ranks, then-former Air Force Chief of Staff Gen. T. Michael Moseley ordered the Air Force Audit Agency to review how the service approved medical deployment waivers and what it did to get Airmen back in the deployment pool.

The audit agency didn’t find widespread abuse of the waiver system but did find examples of poor oversight and record keeping.

For example, a nurse administrator considered non-deployable for medical reasons had gone at least 18 months without an appraisal, and the condition of a junior officer in a career field being downsized had not been reviewed for more than two years.

The audit agency also found that personnel databases didn’t have correct information on Airmen’s medical status. An example cited: 763 pregnant Airmen were listed as non-deployable in medical readiness records but considered to be "worldwide deployable" in the Military Personnel Data System.

After laying out its findings, the audit agency recommended an overhaul of waiver policy.

"There was a call for greater scrutiny, and we finally had the technical ability to do that," Col. Pinkston said. Within a year, the Air Force retooled its rules and began implementing them.

A new Air Force instruction laid out detailed procedures for determining who qualified for a waiver for "duty limiting conditions" and mandated reviews as frequent as once a month. Also introduced was an electronic record-keeping system that allows squadron commanders as well as medical personnel to review Airmen’s medical waivers.

Getting a waiver is like filing a VA Claim it isn’t as easy as the concern of fakers makes it out to be. Airmen still start with a visit to a base clinic or hospital and a doctor’s diagnosis.

Sleep apnea, difficulty breathing while asleep, is an example of a condition that restricts where an airman can deploy but does not require him to stay home, he said. The sandy conditions of desert bases make it difficult to maintain the breathing oxygen equipment used by sleep apnea patients, Col. Pinkston said, but the sufferers could deploy elsewhere if a base could provide adequate treatment.

Because of federal privacy law, an Airman’s medical records that are not related to his ability to deploy are not shared with squadron and wing bosses.

"Commanders can’t know everything, but they can know things that change duty status," Pinkston said.

Once an Airman’s waiver is approved, the Airman’s doctors and squadron commander are expected to make sure the Airman is getting the medical care needed to recover. As a check, the Airman’s status is reviewed monthly by the base’s Deployment Availability Working Group.

The electronic system also automatically flags the records of Airmen with recurring problems prompting deployment waivers. An Airman who does not become deployable after one year will have his case considered by a medical evaluation board, a review that could lead to the Airman leaving the service.

While the percentage of Airmen with duty-limiting conditions has increased since 2001, the rise can be attributed to improved reporting and the Air Force’s willingness to keep in uniform Airmen with skills that are in high demand, even if their deployment options are limited.