Home Veterans ‘Everything Is Breaking Down’ In Haiti

There is still no firm count of how many people perished in Tuesday’s 7.0 magnitude earthquake. The international Red Cross estimated on Thursday that between 45,000 and 50,000 people were killed in the quake, based on information from the Haitian Red Cross and government officials. But U.N. Secretary-General Ban Ki-moon said Friday there was no point in speculating about the scope of deaths or injuries until more information was available.

At least six Americans have been confirmed dead, including one U.S. diplomat, but the U.S. casualty count is expected to rise.

Hundreds of corpses have been stacked up outside the national hospital.

“The bodies went down an entire city block and up a city block,” NPR photographer David Gilkey reported from Port-au-Prince. “As we were standing there, dump trucks, pickup trucks, flatbed trucks were pulling in, completely
filled with bodies, and just dumping them there. I had no idea where they could even put them all.”

U.N. peacekeepers and Haitian government officials have begun to collect some of the corpses and taken them to a mass grave on the outskirts of the city.

Haiti’s president has said that 7,000 bodies have already been buried there.

“It’s not enough, so other sites must be created,” David Wimhurst, spokesman for the U.N. peacekeeping mission, told NPR’s All Things Considered.

Elsewhere in the city, several key roads were blocked by piles of bodies on Thursday night, Gilkey said.

“I don’t know the reason, but we had to turn around four times due to piles of bodies in the middle of the road,” he said.

More than 300 U.S. troops already have arrived and several thousand more are due to arrive over the weekend after President Obama ordered an initial $100 million relief effort. The USS Carl Vinson aircraft carrier also arrived
offshore, with 19 helicopters and the capacity to produce hundreds of thousands of gallons of desperately needed drinkable water.

But U.N. peacekeepers have seen “sporadic episodes of looting,” according to Wimhurst. The Brazilian military, which makes up the largest contingent in the United Nations peacekeeping force, warned aid convoys to add security to guard against looting. 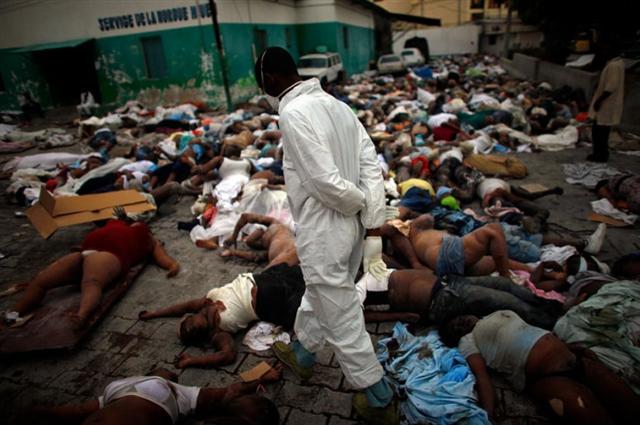 Indeed, some looters — young men and boys with machetes — roamed downtown streets on Friday. “They are scavenging everything. What can you do?” said Michel Legros, 53, as he waited for help to search for seven relatives buried in his collapsed house.

There was still little evidence of aid being distributed downtown, and U.N. officials warned that Haitians are becoming increasingly fed up.