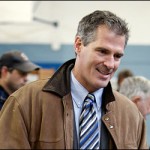 In tonight’s late edition of the Washington Post we find that the Republican candidate, Scott Brown,  for the late Ted Kennedy’s Massachusetts Senate seat has won the election.  The Democrats held that seat for 47 years.

The Democrats filibuster-proof Senate is now gone.  The Republicans have 41 seats and they can successfully filibuster any bill that they wish.  The edge is gone.

The Democratic Party momentum seems to be stopped now when the gubernatorial elections that recently went to the GOP in  both Virginia and New Jersey are taken into account.  The story is entitled Republican upsets Coakley in the Democratic-leaning state and we all need to take stock of the hard right turn that our country is apparently starting (once again) to steer.

Progressives in this country have a lot of work to do if this is an indication of more creeping neo-Reaganization of our country’s politics and foreign policy.

I hate to say it, but we Democrats deserve this.

When the Democratic Party had won as big as it did in the last election cycle, it refused to govern like Democrats would want.  It was too busy trying to stay in the middle of the road, to be a party for all men and women, to be all things to all men.  Politics just does not work that way.

You stake out a position and you push for it.  To be frank, we Democrats dicked around too much with trying to be Republican Lite.  Well, this is the outcome.

Well fellow Democrats, let me say that our leadership wanted to act like Republicans, eh?  Well, we see that mistake now, don’t we?  Given a choice between a Republican Lite and a real Republican, the people will choose a real Republican every time.

It is time to govern like Democrats.  Word to the wise.