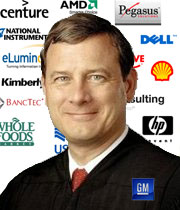 I don’t know if you guys are aware but yesterday’s Burrito Supreme Court Decision officially put a stamp on the end of democracy in the USA.

The Supreme Court has given big business, unions and nonprofits more power to spend freely in federal elections, a major turnaround that threatens a century of government efforts to regulate the power of corporations to bankroll American politics.

A 5-4 conservative majority crafted a narrow overhaul of federal campaign spending Thursday that could have an immediate effect on this year’s congressional midterm elections. The justices eased long-standing restrictions on “independent spending” by corporations and unions in political campaigns.

With corporations now able to spend UNLIMITED FUNDS on political campaigns, its’ just a short matter of time before your reps wear corporate logos.  Next election will be a complete joke!   Don’t bother campaigning or contributing money.  It’s a waste of time.  Corporations will out spend individuals and they will own the message and legislation!

Judge Roberts and his cohorting court jesters just put the nail in the coffin for every American, blue, red, purple…all average Americans have lost it all.

It started in 1986 with the JUST SAY NO campaigns allowing government to confiscate without due process, then to 911 and the Un-Patriot Act, and it has eroded to this…..the official opening of Pandora’s box and the official start of Government for the People, by the Corporations, for the Corporations!

You thought the DRED SCOTT CASE was the cruelest joke laid on the people, think again….it just got p’owned by this sick right wing court of lunatics.

It will go down in history as the official end to democracy in America!

You can now tell you kids when it was officially lost.

Revolt or shut up and live with it.  Your comments please!