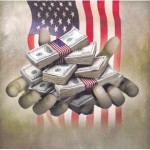 On January 21, 2009, the U.S. Supreme Court over-reached on a narrow case dealing with Federal Election Commission’s prohibition of a politically partisan video on Hillary Clinton from being telecast during the primary campaign between Mrs. Clinton and Barack Obama. Under the guise of first Amendment rights, its over-reach gave corporations the right to participate in the political process and use its funds and resources on campaign ads and other political campaign communications, but not direct political contributions to candidates. In doing so, it reversed a century of legislation barring corporations from using their wealth to dominate the political process.

One can go back to 1907, when President Theodore Roosevelt and the Progressives, in both political parties, legislatively placed a ban on corporations from using their vast monetary advantage to dominate the electoral process.  This ban was expanded over the decades to keep the power of money from corrupting our political process. This ban is of critical importance for fair elections and to assure that the interests of the American people and the general welfare are served.  Many Americans already see that their interests have been compromised by the power of money and vested interests in electoral politics.

Exercising the right to vote is the most important right that the people have to protect their own interests and choose candidates to serve their interests.  Most voters exercise that right with great responsibility.  Their future and the future of the American Republic depend upon fair and free elections.  Their right is now being further threatened by this recent Supreme Court decision.

Obviously, corporations are much more powerful than ordinary citizens. And over the last century, these corporations have grown in size and influence.  We have seen a pinnacling of corporate power and influence.  The United States has many corporations, but we have oligopolies and multi-national corporations dominating our economic order. Many have demonstrated that they are not interested in serving the public interest; and they have no sense of social responsibility. They seek, as we have recently seen, to serve only their own vested interests, as outsourcing of jobs overseas, terminating employee pensions and health benefits, demonstrate.  And as we have all seen in recent decades, corporate lobbyists abound in D.C. and the state capitals to serve vested interests and in turn distort the electoral process.

Moreover, since the 1980s, the concentration of wealth in the U.S., once again, has accelerated and the disparity between the rich and the rest of us has widened greatly.  One percent of the American people have 41 percent of the wealth.  If you calculate the top five percent of the American people in terms of wealth, it is well over 50 percent. It is the people in the top percentiles, an economic aristocracy, who largely own corporate stock and sit on the boards of these giant corporations.  This trend of greater concentration of wealth and power will continue if corporations are allowed to flex their financial muscle and dominate American politics at every level.

The power of corporations and oligopolies has grown over the decades. This latest Supreme Court decision will allow this domination to grow even more.   It is not surprising that three of the five justices who supported this decision are members of the Federalist Society, a very conservative legal entity which espouses libertarian views and judicial restraint.  Judicial restraint was not exercised by the Society’s three Court members (John Roberts, the Chief Justice, and justices Antonin Scalia and Samuel Alito) in this decision.

This judicial coup will impact all future elections at every level. Its impact will be seen this coming Fall when we have Federal, state and even local elections. Then the American public will see that this judicial decision has dramatic results. Radio and TV broadcasts, and other media will be saturated with political ads. Vested interests will try to shape the perceptions of the electorate and, if recent political ads are any indication, they will be negative and apt to confuse and divide, rather than educate and unite.

Candidates supported by the corporations will most likely be victorious and those elected will be beholden to those who got them elected.  And American democracy will be its foremost casualty. Then we will see first-hand that this Supreme Court decision allowed another coup: the ascendancy of the Corporate State.

Is this reason veterans served their country?