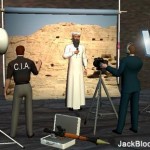 YOU WERE CAUGHT, ADMIT IT AND MOVE ON WITH LIFE

The new audio tape from “Osama bin Laden” taking responsibility for the idiotic and childish incident in Detroit where moronic Nigerian armed with a useless “bomb” is simply too much.  Now using audio tapes because, supposedly, nobody in Al Qaeda got a flash drive video recorder for Christmas is even more of a joke.  Please, with the hundreds of millions our Saudi allies have given to terrorists, a video camera the size of an Ipod might have been a nice touch.   Even funnier was releasing the audio, using algorithm software probably illegally downloaded off the internet, and giving it to Al Jazeera.

Pundit Debbie Schussell, former Mark Siljander (VT staff writer) staffer, has bitterly complained about the strong ties between Fox News and Al Jazeera.  Fox owner, Rupert Murdoch, is the most powerful “influencer” of the ultra-rightists in Israel.  Attempts by the press to present Al Jazeera of today as the “pro-terrorist” media it seemed like many years ago is an epic misrepresentation.

A further abuse, of course, is not only that we are no longer seeing the easily debunked bin Laden doubles whose video tapes were “mysteriously” released by SITE Intelligence, the Rita Katz/Israeli group that seems to find them in trash bins behind delicatessens.  The “new” audio tape itself contains statements claiming credit for 9/11 in direct contradiction to the real bin Laden videos, the only ones authenticated.  If you wondered why the FBI doesn’t list Osama bin Laden as a suspect in 9/11, I think you have your answer.  If they think the bin Laden “admissions” aren’t credible, I wonder who the FBI is investigating or if they have simply been told to mind their own business.

The terrorist incident itself is the last thing Al Qaeda would ever take responsibility for despite the claims by SITE Intelligence that they found an unnamed and unverified internet site that confirmed this.  Who in the name of all that is holy would want to take responsibility for an idiot who was led onto an American bound plane by passing around searches, customs and passport control in an airport run by an Israeli security company but who carried a “bomb” designed by a three year old.

Who would be so stupid as to try to pass off this childish tape when reliable witnesses saw the terrorist being led onto the plane in Amsterdam in a manner that required full cooperation from security personnel, passport control and the airline itself.  We don’t even have to go into the fact that the “terrorists” in Yemen that supposedly claimed responsibility were released from Guantanamo under the personal signature of Vice President Cheney in 2007 or that before the incident, the government of Yemen tied these individuals to Israeli controllers thru captured computers.

I am only thankful that the duped terrorist, or as Lee Oswald had said, “patsy”, was the moronic son of a long time Mossad business associate in Nigeria.  Mr. Mutallab, banker, but mostly head of Nigeria’s defense industry, DICON, managed  almost entirely by Israelis, may have much more story to tell other than the one he told CIA Chief of Station on November 19, 2009.  Do we want to follow former Homeland Security director Chertoff, not only a Jewish activist but currently representing companies selling body scanners to airports and the mysterious ability for someone on worldwide terrorist watch lists to be escorted onto a US bound airliner without passport or search?

Billions in profits were realized almost instantly after this incident.  Companies tied to Chertoff, Israel and India were on the receiving end.

The only reliable information the world has on Osama bin Laden is that he was killed by American troops on December 13, 2001 and buried outside Tora Bora by his following, 30 Mujahideen.  At least 6 of these witnesses were alive at last check.  Since his death, every “leaked” video or statement has been timed for convenient electoral “terrorist” scares, been childishly unprofessional and has only worked to discredit Islam.

Every effort has been made by the MSM/corporate press to cover the facts behind the Christmas “bombing” and push the blame on everyone but the obvious culprits.  That effort was deemed so successful that now a brazen attempt to resurrect long dead Osama bin Laden to take responsibility for trying to set off a bomb with a flame igniter that could only be exploded using a blasting cap, is being made.

Is this an attempt to make Al Qaeda look stupid?

“My name is Osama bin Laden.  I had a moron carry a defective bomb onto a plane full of Islamic families returning to Detroit, the most Muslim city in the west, as part of a terror campaign.  I chose a flight that connected from  the Middle East  so I could kill as many of the innocent faithful as possible.  Please excuse this and the dozen or other mistakes made but being dead has left me less sharp than I once was.  No, I do not work for the Mossad, they simply tape and distribute my interviews.  This is part of an agreement with my talent agent who is Jewish.  All talent agents are Jewish, ask anyone in Hollywood. What do you expect, miracles? 10% of nothing is nothing.

For my faithful followers, I expect to be a regular on Californication next season on Showtime.  I’ll be the guy with the beard who seems dead.”

The second possibility, one designed for the “spiritual” crowd is this:

“I am Osama, the ghost of Tora Bora.  Please give more money to Israel, vote to extend the Patriot Act and buy new airport scanners from the companies listed on my weekly newsletter distributed by SITE Intelligence.  Watch for more insane threats coming in the future and have a nice weekend.  Remember to stop eating pork.”

Any group that could make 5 airliners outwit NORAD, the most advanced air defense system in the world, any group that could train terrorist pilots inside the United States itself with nobody catching on, and it gets worse.  Sources tell us that FBI Special Agent Stephen Butler may have “accidentally” been cashing checks for and paying rent for two of the 9/11 hijackers.  Can people who can get this kind of thing done put a moron on an aircraft at an airport secured by an Israeli company, “extremely closely” related to the same company that managed security at all of the airports used on 9/11?

When Michigan attorney Kurt Haskell and his wife witnessed the famous, “he has no passport, he is a Sudanese refugee, we do this all the time”, incident in Amsterdam, only a phony bin Laden tape could make America forget, or so “they” hope.  Imagine our terrorist being  taken to meet the security head for the “airline” with his “Indian looking” handler, bomb strapped to his underwear.  Think of this exploding moron and his handler and who they would have had to know to get past, not only airline security and the Israeli company guarding the airport but Dutch passport control as well.

Anyone with the power to load the “crotch bomber” on a plane with no passport could have put a nuclear weapon in luggage easier.  Nukes are seldom on watch lists or have parents running to the CIA reporting them as “terrorists.”  Next time we are being lied to, please, have more respect.  Not everyone is a dumb as a Fox News, CNN,  the Wall Street Journal or the New York Times.

It is one thing claiming that poor, long dead Osama bin Laden runs terrorists in Yemen.  It is quite something else proving that he manages an airport in Europe or runs the Dutch government.   When US Senators can’t get thru airport security without being detained, bin Laden’s ability to get diplomatic VIP treatment for known terrorists makes him more than a threat, it makes him a magician.

We are thankful that nobody was seriously injured and that we can all laugh about this, maybe not all of us.  The people of Nigeria don’t think it is funny.  Millions of Muslims aren’t seeing the joke either.  Air travelers are having their bad moments also.  Some, however, have benefited in a major way, politically, financially and militarily.  None of those people, however, are ever openly accused of terrorism.