Home Health Army Report: PTSD up – Combat wounds not the leading cause of...

American soldiers in Iraq and Afghanistan were more likely to be medically evacuated for health problems such as a bad back than for combat injuries, says a new study published last week in the British medical journal, Lancet. However experts noted that the large number of Soldiers with chronic physical pain was likely masking an even bigger problem with psychiatric illnesses such as Post-Traumatic Stress Disorder, or PTSD.

The study was paid for by the the U.S. Army and John P Murtha Neuroscience and Pain Institute.

Researchers found that psychiatric disorders rose during the period studied, 2004 to 2007, despite an increased focus at the Pentagon on treating mental health problems. 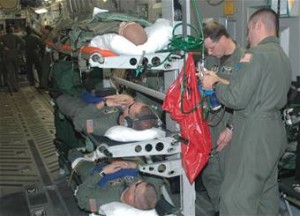 Dr. Steven Cohen of the Johns Hopkins School of Medicine in Baltimore and colleagues analyzed data from about 34,000 American military staff medically evacuated from Afghanistan and Iraq during those years, or about 6 percent of the service personnel.

“It’s the nature of being a Soldier,” he said in an interview with The Associated Press. “If you’re in an infantry unit for a year, you will have overuse injuries. Back pain is the rule, not the exception.”

Cohen said the findings should spur military health authorities to tweak their strategies.

“I don’t think the military prepares (its doctors) for the types of injuries they see,” he said. “Very few people have to perform complicated procedures like tracheotomies (windpipe surgery), but what they will see a thousand times more is overuse injuries and tendinitis.”

Cohen and colleagues also found troops evacuated for psychiatric reasons increased 32 percent during 2004-2005 and 62 percent during 2006-2007. That might be due to the stress of longer tours of duty, he said, since troops often are more susceptible to mental illness the longer they serve.

Twenty-four percent of the evacuations from Afghanistan and Iraq in 2004 to 2007 were due to muscular problems such as back pain, tendinitis, and repetitive stress injuries.

Combat wounds came in second at about 14 percent. That was followed by neurological disorders (10 percent), psychiatric disorders (9 percent) and spinal pain (7 percent).

Pentagon spokesperson Dr. Michael Kilpatrick, director of strategic communications for the U.S. Military Health System, said officials are investigating how best to protect troops on the front lines from physical wear and tear. To do that, they are examining how much soldiers need to wear heavy protective body armor and carry water and food supplies, and the length of their rotation times, said Kilpatrick, who was not involved in the study.

In response to the stress place on troops by multiple deployments,  Kilpatrick said.

“This is a new era for us with multiple deployments,” Kilpatrick noted that mental health programs were increasing in the military and that about 1,000 specialized staff had been added to address psychiatric issues.

Experts still emphasied that the large number of troops with chronic physical pain were likely hiding even bigger problem with psychiatric illnesses such as Post-Traumatic Stress Disorder, or PTSD.

“It would be astonishing if that were not the case,” said Simon Wessely, director of the Centre for Military Health Research at King’s College London. Wessely also was not connected to the Lancet study.

“Many people have nonspecific symptoms like back pain, but when you need to evacuate them because of that, it’s usually a marker that something else is going on,” he said.

VT Editor’s Note: Given the stigma and fear troops feel about reporting mental illness while on active duty, it is much easier to claim something more acceptable to the Armed Forces that may not be a career ender or keep troops from redeploying again. I believe troops are more likely to report PTSD once they are no longer under Pentagon control.

Another issue Veterans, Military Families, and our Troops need to be asking the White House, Congress, Pentagon, American Medical Association, and American Psychiatric Association – how come a report paid for by the U. S. Army at American taxpayer expense ends up being published in a British Medical Journal?  So much for Support ‘Our’ Troops. Is is the responsibility of our NATO allies to Support Our Troops?

Remember that at the President’s State of the Union Address.