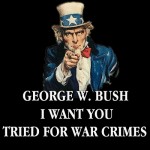 It’s been suggested more than once that the only reason I’m so passionate about having the Bush Administration charged with war crimes is because I’m a liberal, and therefore, harbor some sort of deep-seated hatred for George Bush. But that’s not true. The fact is, I neither hate George Bush, nor any other conservative. I’m a progressive, not an ideologue, so I have no ideological motive to see any adversity brought into Bush’s life, or anyone elses. My passion stems from the fact that because I am progressive, I have a progressive’s lust for justice.

As I’ve mentioned in previous articles, progressives have but one guiding philosophy, one that entails the primacy of humanity, justice for ALL, and the search for truth – wherever that truth may lead, and regardless to whose ox is gored as a result. It’s just happens that in this case, the ox that must be gored is in our own backyard.

But in today’s political environment, I can certainly understand how people might feel the way they do, especially conservatives. It is far from lost on me that many of those who claim to be progressives are actually quite partisan – they’re ideologues. They view politics from the perspective of a sports fan – it’s our team against theirs, and the more pain their team sustains, the better we like it.

But I want to assure you that’s not the case here. I’m looking at this situation purely from the perspective of what is just, and what is just in this case, is for Bush, Cheney, and their cohorts be held strictly accountable for their criminal conduct in Iraq. And I sincerely hope that once I’ve laid out my case that even the most cynical of you will understand my point of view – even if you disagree with it.
Let us go back to what we were feeling during Nine-Eleven for a moment. Think about how much horror and pain we went through as we witnessed three thousand of our citizens being brutally murdered. It was such a traumatic experience that now, close to a decade later, we’re still traumatized by it. It seems like it only happened yesterday.

But we’ve never once stopped to consider that if that one day could be so traumatizing to the American psyche, what it must be like for the Iraqis, who have been forced to watch hundreds of thousands of their people killed, and have had to face the horror of a Nine-Eleven every day of their lives for the past seven years. The horror that has been brought upon the Iraqi people goes far beyond what I can express here in words, and the injustice of their situation is bruatally unconscionable – and the Iraqi people did absolutely nothing to us.

Yet, just think of the pure hell they’ve had to go through just to try to protect their children in a Nine-eleven-like environment everyday for seven years; never knowing when something – anything – might explode tearing to shreds the little bodies of the children that mean more than anything else in the world to them.

Imagine what it would be like to have some country come over here and kill hundreds of thousands of Americans (millions in order to have the impact we’ve had on Iraq). Then later, having that country say, “You know, now that we’ve thought about it, we shouldn’t have done this. It was a mistake. But what the hell – what’s done is done, so we need to look forward.”

And even as they speak of “moving forward,” you’re thinking of the past – of happier times. You think of mother’s smile, your father’s laugh, the dreams of your beautiful young sister, and how goofy your silly little brother could be. But now, they’re all now gone. You’re the only one left, so far.

Would you be willing to accept a simple apology? I don’t think so. Well, that’s what the United states is trying to give the people of Iraq to replace justice – at least, President Obama. Dick Cheney’s only regret seems to be that he didn’t torture enough of them.

For the U.S. to think it can just casually walk away from committing that kind of atrocity to hundreds of thousands of families, then simply say, “We’re sorry for what happened, but now’s the time to look forward – forward, but without any accountability – speaks volumes about American arrogance, who we are as a people, and why people want to kill us.

President Obama spoke of “change.” But what could he possibly thinking, if this represents change? What kind of change could he possibly be speaking of where politics is more important than the horror we’ve committed? Doesn’t he realize that if we don’t bring the people responsible for the atrocities in Iraq to justice, America will never be safe again? And beyond that, the U.S. will never be able to look the world in the eye and claim to be a nation that believes in justice, and the rule of law ever again.

And it’s not only what we’ve done that’s so horrible, the cycical, greedy, and corrupt motives behind our actions was almost as bad as the act itself – and that corruption of the American soul still walks among us. We haven’t learned a thing. Dick Cheney claims that terrorist want to kill us because they’re jealous of our freedom. That’s complete bullshit. They want to kill us because we won’t mind our own business, and we keep trying to steal their oil.

America has got to learn two things: First, if you keep slapping your neighbor and picking his flowers, eventually he’s going to hit you back. We may think that we’re “exceptional,” but that doesn’t give of the innate right to abuse others with impunity. And secondly, if you break into your neighbor’s home and wipe out his family, then you get caught with a pocketful of his valuables, trying to plead self-defense won’t fly. Any court in the world will convict you of being a murderer and a thief.

We’ve never executed one criminal in the history of America whose crimes even approached the seriousness of the crimes committed by Bush and Cheney – and many, against our own troops. The crimes committed by Dick Cheney makes Tookie Williams look like a choirboy. Yet, now we want to simply walk away and expect the world to believe that America stands for justice? I don’t think so.

A MESSAGE TO BUSHLAND

It’s scary how easily the American people can be manipulated to the point that they find the death of entire families a hoot; how we can sit in front of the tv set with chilli dogs and fries and cheer on the death of others like we’re watching the Super Bowl. And it’s a tribute to psychosis how America can unleash mass destruction in “an attempt to prevent mass destruction,” in the name of God.

Can’t you see that many of “those Towel-Heads” are children just like your own? You didn’t really think the U.S. could unleash destruction like we saw and not kill children did you? Rumsfeld said, “Well, shit happens.” But shit doesn’t just happen–you allowed it to happen. You made it happen. You cheered it on! Consider that as the children bleed and you’re admiring the beauty of “Shock and Awe.”

Think about your own children as “collateral damage.” Think about them screaming in horror while you’re helplessly watching their limbs being blown off. Think about them desperately reaching out to you for comfort as life slowly drains from their tiny bodies. Think about foreign boots kicking down your front door, then strangers walking through your home systematically killing every man, woman and child. Picture the last sight that you ever see on this Earth is of your sweet little six year old daughter, with her brains spilling from her tiny little head. Think about that picture, America–then ask yourself, who’s really the terrorist?

Where has America gone? Who’s left to stand up for justice and humanity? You say, God Bless America? You’d have to be a fool to think God is gonna bless America after what we’ve done–for choosing Standard Oil over Justice, and Exxon over God himself. In God we trust? How dare you blame this atrocity on God! It is in Bush you trust:

You also trust Bush that God will bless America–but this Ain’t America. America is the land of the free, and home of the brave, the land of just souls who freed their slaves. No, this is not America, this is Bushland-the land of small pox infected blankets; the land of public lynchings and church-place bombings; the land of imprisoned Japanese-Americans, and corporate murderers.

The land of the free and home of the slave; the land of My Lai, and Calley’s mass grave.

And you trust that God will bless Bushland?

Well trust this -You are blind, my friend.