Home WarZone It begins. An Anti-War Secessionist Movement is alive. 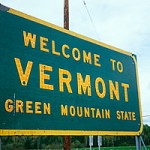 In today’s Time Magazine online we learn that in the State of Vermont, among perhaps the most left leaning population in the Union, a secessionist movement has started in the wake of these unpopular wars.  They have a slate of anti-war and secessionist candidates and they are running for office in the state. The piece is entitled Secessionist Campaign for the Republic of Vermont .

It seems that roughly 13% of the state’s population presently claims that they support the movement.  Here is an excerpt from the article:

“According to a 2007 poll, they have support from at least 13% of state voters. The campaign slogan, Naylor told me, is “Imagine Free Vermont.” In his fondest imaginings, Naylor said, Vermonters would not be “forced to participate in killing women and children in the Middle East.”

This is what happens when our nation continually engages in these ridiculous and unnecessary wars overseas without taking into account the wishes of her citizens.

This is what happens when Amerika places money and potential power grabs overseas ahead of the wishes of the people and instead caters to the whims of the military industrial complex, the emerging market manipulators, the war industry captains, the energy cartels and any other group that the Supreme Court has now given the powers of citizenship.

It is no accident that this is now public knowledge throughout the nation after the Supreme Court decided that money rules our political system.

No it does not.

We now face serious attempts at secession from citizens who have no intention of being ignored by the central government and its manipulting, puppet-master elites who constantly have access to the levers of power, regardless of the will of the citizens at large.

Fascism in our country is  now facing  a viable and growing citizens’ anti-war and secessionist movement willing to finance candidates who support state secession and an anti-war platform.

We are talking about civil war ultimately if this carries through to its logical end.

Does Washington D.C. understand this?

This is the ultimate result of  generation upon generation of rule by the elites, rule by the Robber Barons, rule of money and its supposed power over the will of the people.  One man, one vote cannot be ignored forever.

Money and its power is meaningless in this situation if civil war ensues because aware citizens realize that they have been preempted by money, power, position and ignorance of what it means to carry the burdens of working class America.

Don’t anybody ever say that I did not say for years, “I told you so!”

The chickens are coming home to roost.