The Obama administration’s pact to use seven Colombian military bases accelerates “a dangerous trend in U.S. hemispheric policy,” an article in The Nation magazine warns. 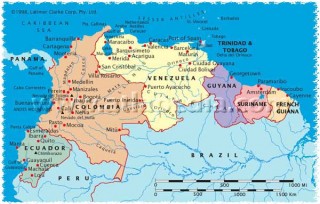 The White House claims the deal merely formalizes existing military cooperation but the Pentagon’s 2009 budget request said it needed funds to improve one of the bases in order to conduct “full spectrum operations throughout South America” and to “expand expeditionary warfare capability.”

“With a hodgepodge of treaties and projects, such as the International Law Enforcement Academy and the Merida Initiative, Obama is continuing the policies of his predecessors, spending millions to integrate the region’s military, policy, intelligence and even, through Patriot Act-like legislation, judicial systems,” writes historian Greg Grandin, a New York University professor.

Although much of Latin America is in the vanguard of the “anti-corporate and anti-militarist global democracy movement,” Grandin writes, the Obama administration is “disappointing potential regional allies by continuing to promote a volatile mix of militarism and free-trade orthodoxy in a corridor running from Mexico to Colombia.” Grandin’s article in The Nation’s February 8th issue is titled, “Muscling Latin America.”

The fountainhead of this effort is Plan Colombia, a multibillion-dollar U.S. aid package that over the past decade “has failed to stem the flow of illegal narcotics into the United States,” Grandin says, noting that more Andean coca was synthesized into cocaine in 2008 than in 1998.

Underlying the anti-drug fight, however, is a counterinsurgency struggle for control of “ungoverned spaces” via a “clear, hold and build” sequence urged by the U.S. military to weaken Colombia’s Revolutionary Armed Forces(FARC). The Bush White House condoned the right-wing paramilitaries who, along with their narcotraficante allies “now control about 10 million acres, roughly half of the country’s most fertile land,” Grandin reports. They also spread terror in the countryside and are responsible for many killings and for driving peasants from their land.

What’s more, “The country’s sprawling intelligence apparatus is infiltrated by this death squad/narco combine, as is its judiciary and Congress, where more than forty deputies from the governing party are under investigation for ties to (the right-wing) AUC (United Self Defense Forces).

“Colombia remains the hands-down worst repressor in Latin America,” Grandin asserts. “More than 500 trade unionists have been executed since (Alvaro) Uribe took office. In recent years 195 teachers have been assassinated, and not one arrest has been made for the killings. And the military stands accused of murdering more than 2,000 civilians and then dressing their bodies in guerrilla uniforms in order to prove progress against the FARC.”

Afro-Colombian and indigenous communities fighting paras who have seized land to cultivate African palm for ethanol production have been evicted by mercenaries and the military, Grandin says. “From Panama to Mexico, rural protesters are likewise targeted. In the Salvadoran department of Cabanas,” he observes, “death squads have executed four leaders—three in December—who opposed the Vancouver-based Pacific Rim Mining Company’s efforts to dig a gold mine in their community.”

Obama could reconsider the Pentagon’s base deal and Plan Colombia, Grandin writes, “But that would mean rethinking a longer, multi-decade, bipartisan, trillion-dollars-and-counting ‘war on drugs,’ and Obama has other wars to extricate himself from—or not, as the case may be.”

“Unable or unwilling to make concessions on these and other issues important to Latin America—normalizing relations with Cuba, for instance, or advancing immigration reform—the White House is adopting an increasingly antagonistic posture,” Grandin explains. He notes that after Iranian President Mahmoud Ahmadinejad visited Brazil, Secretary of State Hillary Clinton warned Latin Americans to “think twice” about “the consequences” of engagement with Iran. An Argentine diplomat responded, “The Obama administration would never talk to European countries that way.”

(Sherwood Ross is a Miami-based publicist who formerly reported for the Chicago Daily News and worked as a columnist for wire services. Reach him at [email protected])