Home Economy Econ Crisis Is Not Over, Second Wave Possible 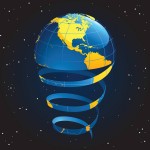 Paul Craig Roberts sees an enduring lack of financial regulation; public deficits and debt; a possible loss of confidence in the dollar as the world reserve currency; and the “insane” offshoring of U.S. manufacturing, industrial, and professional service jobs: All compiling and forming another rogue wave. Roberts was spot-on about the last crisis back in 2007, Offshoring Interests and Economic Dogma. Let’s hope the neoliberals listen and act.

The global crisis is understood as a banking crisis brought on by mindless deregulation of the U.S. financial arena. Investment banks leveraged assets to highly irresponsible levels, issued questionable financial instruments with fraudulent investment grade ratings, and issued the instruments through direct sales to customers rather than through markets.

The crisis was initiated when the U.S. allowed Lehman Brothers to fail, thus threatening money market funds everywhere. The crisis was used by the investment banks, which controlled U.S. economic policy, to secure massive subsidies to their profits from a taxpayer bailout and from the Federal Reserve. How much of the crisis was real and how much was hype is not known at this time.

As most of the derivative instruments had never been priced in the market, and as their exact composition between good and bad loans was unknown (the instruments are based on packages of securitized loans), the mark-to-market rule drove the values very low, thus threatening the solvency of many financial institutions. Also, the rule prohibiting continuous shorting had been removed, making it possible for hedge funds and speculators to destroy the market capitalization of targeted firms by driving down their share prices.

The obvious solution was to suspend the mark-to-market rule until some better idea of the values of the derivative instruments could be established and to prevent the abuse of shorting that was destroying market capitalization. Instead, the Goldman Sachs people in charge of the U.S. Treasury and, perhaps, the Federal Reserve as well, used the crisis to secure subsidies for the banks from U.S. taxpayers and from the Federal Reserve. It looks like a manipulated crisis as well as a real one due to greed unleashed by financial deregulation.

The crisis will not be over until financial regulation is restored, but Wall Street has been able to block re-regulation. Moreover, the response to the crisis has planted seeds for new crises. Government budget deficits have exploded. In the U.S. the fiscal year 2009 federal budget deficit was $1.4 trillion, three times higher than the 2008 deficit.  President Obama’s budget deficits for 2010 and 2011, according to the latest report, will total $2.9 trillion, and this estimate is based on the assumption that the Great Recession is over. Where is the U.S. Treasury to borrow $4.3 trillion in three years? – Read the rest at CounterPunch, the best political site on the net.